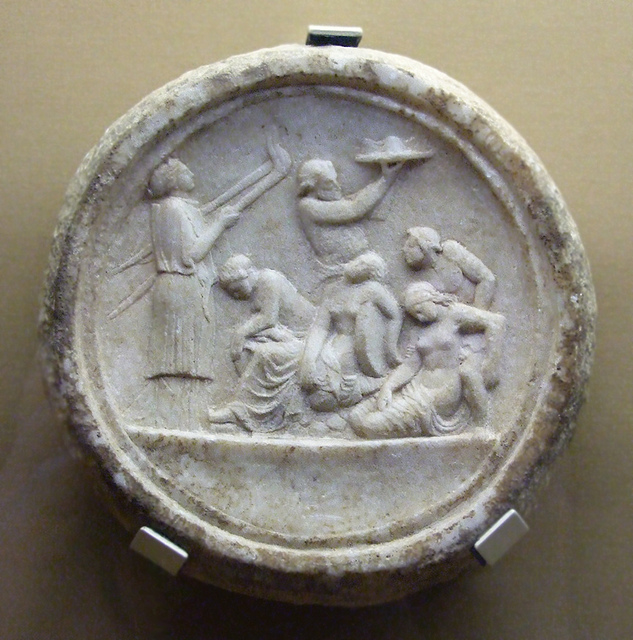 Dionysiac ritual is a ritual of performance where worshipers play the parts of characters in Dionysiac narratives, whether the scene is set outdoors in the countryside or in the heart of the city. Dionysus
himself is impresario. He energizes the set, animates the costumes, and inspires the action. As Diodorus
says, the women who served Dionysus imitated the raving women who accompanied Dionysus in the
ancient stories.Official groups, like the Thuiades at Delphi and Olympia, the Athenian women who joined
the Thuiades at Delphi to dance on Parnassus,or the Agriades in the Peloponnese, performed ritual dances that imitated the wild dancing of their imaginary counterparts. They carried the thursos and wore the
costumes of the mainades: the long, light, pleated khiton or the long-sleeved pleated versions with elbow sleeves that covered the hands, the nebris (fawn skin), the pardelee, (leopard skin), and in Thrace, the bassara, a costume made of fox skins.They knew the music and they memorized the correct, stylized motions of the dance.

At Sicyon sacred paraphernalia were kept in the kosmeterion, a dressing room in a sanctuary of Dionysus near the theater. Stone statues of Dionysus and Bakkhai stood outside the nearby temple of Dionysus for all to see. Special images were kept hidden in a place not to be revealed. One night in the year these images were brought from the kosmeterion to the temple in a procession lit by torches and accompanied by the
singing of hymns.Ritual paraphernalia and costumes stored in the kosmeterion would have been used to equip and clothe those eligible to perform the Dionysiac ritual.Dionysus himself could be represented by his costume (usually a khiton and himation) together with his mask or even by his mask alone. On red-figure pottery women celebrate wine under an image of Dionysus that is simply a figured garment wrapped around a pole capped with a mask facing the viewer.The same word, prosopon, meant both ‘‘face’’ and ‘‘mask,’’ and the face of Dionysus was powerful in itself At Corinth two wooden statues had faces painted red and
bodies covered in gold. These two statues represented a double Dionysus: Bakkheios,‘‘Raving with Bacchic mania’’ and Lusios, ‘‘Releaser.’’ At Megara there was a wooden statue of Dionysus covered up except for its face, and when fishermen at Methymna hauled up from the sea a mask of Dionysus made of olive wood, the Delphic oracle advised the people to worship Dionysus as a prosopon.
.
Dionysus is a god who plays many roles, and he can change his appearance at will.As god of the theater, he is associated with the process of transition actors undergo when taking on a new role, because the actor puts on a new identity with each new mask .In Aristophanes’ Thesmophoriazusae the playwright Agathon says that to write successful tragedies, the dramatist must identify with his characters. To write about women, a writer should wear a woman’s clothing and experience a woman’s habits.Dionysus had the power to change from one identity to another, and such transitions were also part of the Bacchic experience for his worshipers ,both actors and spectators. Dionysus himself, who received the dedications of prizewinners, was part of the theatrical process of mimesis. The giant phallos displayed in the theater before the dramas began prepared the site for spectators to view the plays

Dionysiac rituals for women were organized by the city or deme and scheduled in official ritual calendars. At Delphi, where the festival was called Thuia, the Thuiades had regular ritual responsibilities .Pausanias says that they ‘‘raved’’ on the Corycian heights of Parnassus for Apollo and Dionysus,but in fact, their ‘‘raving’’ was officially scheduled to take place in winter every two years.Officially sponsored festivals often distinguished ritual for females from ritual for males. At Elis the split was spatial as well as based on gender. Here, women called Thuiai engaged in ecstatic dancing at the Thuia for Dionysus at his temple near the
theater. Males celebrated wine at a little sanctuary of Dionysus out of town. Elsewhere, female worshipers of Dionysus celebrated nocturnal rites that excluded males. They beat drums, performed wild dances, and banqueted together on sacrificial meat.The evidence for actual Bacchic rites exclusively for females is sparse. An exception is the fourth-century calendar of sacrifices found in the rural Attic deme of Erchia, listing annual sacrifices to Dionysus and Semele for the women of the deme.The costs were funded by local liturgy: 12 drachmas to purchase the goat for Dionysus and 10 drachmas to purchase the goat for Semele. The meat could not be taken away from the sanctuary, but had to consumed on the spot. The women, therefore, practiced conventional sacrifice,thusia, followed by a ritual banquet. A stone from Methymna preserves a lex sacra that regulates an all-night ceremony (pannukhis) in a sanctuary where no men were allowed.Because the text mentions thursoi, the all-night rituals must have been in honor of Dionysus. Most of the extant fragment is devoted to the requirements for the gunaikonomos, a male publicly appointed to supervise the women at the event. He had to be at least 40 years old and a citizen of Methymna. His primary responsibility was to guard the double doors to the sanctuary and to see to it that no male entered.

Literary sources indicate a variety of local rites, but nothing specifically ‘‘maenadic.’’ At Chaironeia, the women acted out a search for Dionysus before taking part in a sacrifice that was followed by a feast during which they told riddles.At Brysiai in the Peloponnese the women, with no males present, performed a sacrifice to Dionysus so sacred that it was wrong even to speak about it.Men could view the agalma (statue) of the god outside the temple, but only women could look at the agalma inside. On the road from the eastern frontier of Lakonia to Sparta there was a precinct of a local hero adjacent to a sanctuary of Dionysus. Two groups of females, eleven Dionysiades and eleven Leukippides, offered the first sacrifice to the hero because he had shown the god the way to Sparta.Women participated in traditional ritual activities for Dionysus. They erected statues of themselves and made dedications in sanctuaries. Fathers, husbands, and sons offered statues of their daughters, wives, or mothers who had served as priestess for Dionysus. Men and women made dedications to Dionysus together, and women also made dedications alone. Simo of Erythrai, a priestess of Dionysus ‘‘Protector of the Polis,’’ said in her dedication that she wanted to be remembered
by her children and descendants.Males, however, were more likely than females to be mentioned in epigraphical texts. This bias inevitably distorts any discussion of gender in Dionysiac cult. The evidence from Thasos is a good example. At Thasos an unpublished inscription addresses Dionysus as ‘‘Lord of
the Maenads’’,presented in French translation only). Although the sacred enclosure ‘‘covered with vines’’ mentioned in the text seems intended for rites involving mixed groups, all Bacchic worshipers on Thasian membership lists are male.

At Athens exclusively male rituals for Dionysus were organized around winedrinking and the theater. Several Athenian festivals highlighted grapes and the making of wine: Lenaia, Anthesteria, Oschophoria, Theoinia, and Iobakkheia, but the Anthesteria are the only rituals whose events can be reasonably reconstructed. Scheduled to coincide with the earliest hint of spring, the Anthesteria celebrated the first tasting of the previous year’s vintage. A sanctuary of Dionysus Limnaios was opened one day in the year for this event. The three-day festival included several different celebrations. On the first day, the Pithoigia, the storage jars, pithoi, were opened for the tasting of the wine. The second day, Khoes, was a day that began with
preparations against pollution and ended with each adult male drinking a pitcher (khous, pl. khoes) of wine in silence. Fear of pollution was justified because this was a day when ghosts of the dead could return. The third day was called Khutrai, ‘‘Pots,’’in honor of the simple earthenware pots used for cooking the panspermia, a porridge made up of all sorts of grains. This was a simple meal, without meat, to restore the city to a normal state once the dead were back where they belonged.Respectable women were not encouraged to drink wine, yet certain qualified females presided over wine rituals during festivals at Athens. At the Lenaia it now seems that women participated in a sacrifice followed by a banquet where they
entertained Dionysus in a mock symposium and shared in the wine themselves.At the Anthesteria the priestess of Dionysus served wine, and the Basilinna,wife of the Basileus, took part in a skit that must have represented renewal for the city. She waited in the boukoleion in the agora to receive Dionysus himself in sexual union. No one knows what actually took place, but the Basileus probably played, in costume, the part of the god.The sexual status of the women who performed public ritual during the Anthesteria was open to scrutiny. The Basilinna herself had to be in her first marriage and a virgin at the time of her wedding. The fourteen Gerarai, ‘‘Venerable Women,’’ who assisted the Basilinna, had to swear an oath of purity before her to demonstrate that they were qualified to preside at the fourteen altars in the sanctuary.
Αναρτήθηκε από Unknown