Delphi, site of the sanctuary to Phoebus Apollo, the Pythian Games and the legendary Oracle "Pythia". 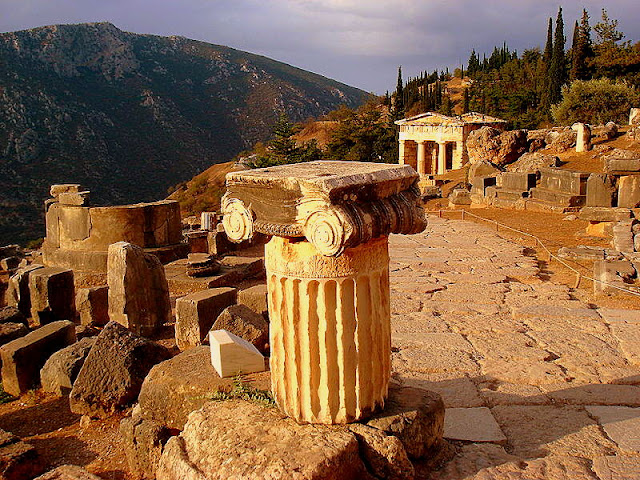 Geographically, Delphi is situated 2,000 feet above sea level, set in a semicircular spur of Mount Parnassus which rises to 8069 feet, this natural barrier is known as the Phaedriades (shining ones), and overlooks the Pleistos Valley, 15km southwest from the site is the central Corinthian Gulf where the ancient harbor of Kirrha was situated, it was here the supplicants landed.Delphi, site of the sanctuary to Phoebus Apollo, the Pythian Games and the legendary Oracle "Pythia". The name of the site may commemorate Apollo's cult title which is "Delphinios" meaning dolphin or porpoise. As one legend says, Apollo first came to Delphi in the guise of a dolphin swimming into the Corinthian Gulf bringing with him priests from Crete, but in another version Apollo journeyed from the north pausing at Tempe, in Thessaly, and gathered laurel. Every fourth year laurel was taken from Tempe to Delphi, which became the prize in the form of a crown worn by the victors of the Pythian Games.

In ancient times Delphi was known as Pytho. Homer tells of a rocky place called Pytho in his Iliad. The mythology attached to Delphi dates back to prehistoric times. It is thought that there was a shrine to the earth-mother "Gaia" and was later shared with Poseidon, who originally was the god of earthquakes and water. The oracle at that period in time was translated from the lapping of the waters, and the rustling of the trees, (the oracle of Dodona, in Epirus, northwestern Greece, translated the rustling from a sacred beech tree). A mythical figure called Herophile, who was more commonly known as "Sibyl" sang the oracle in Gaia's shrine, and from that time on all prophetesses where known by that name. The "Sibylline Rock" can still be seen, and it was here the Sibyl sat and gave out her prophecies speaking in riddles. According to Pausanias, the Sibyl was the daughter of a mortal and a nymph "born between man and goddess, daughter of sea monsters and immortal nymph". Other versions believed she was sister to Apollo, and others his daughter. According to one legend, Gaia gave the oracle to her daughter, the goddess of justice Themis, who in turn passed it on to her sister the moon goddess Phoebe.

Apollo became the main deity when, according to Homer, "he killed the fearsome dragon Python, piercing it with his darts". This is how, in mythology Apollo was introduced to Delphi, by killing the serpent or dragon Python in its lair beside the Castalian Spring. Python was the protector of Gaia and the sanctuary of Pytho, the young god was given the name "Pythian Apollo"(part of Apollo's cult was a sacred serpent), but only after serving nine years to king Admetus as a cowherd, to make amends for his deadly deed. When Apollo returned to Delphi he took over as its ruler, and to celebrate his deeds they held a festival in his honor every nine years, some versions say eight. It was known as the "Septeria".

Delphi was also known as the center of the world, the Omphalos, a carved symbol of prophetic arts and also represented the "navel of the world". To find out exactly where the center of the world was located, Zeus released two eagles from opposite ends of the earth, one from the east and one from the west, and the precise spot where they met, was in Delphi. Apollo allowed Dionysus to stay in Delphi, but only for three winter months, while he visited the country of the Hyperboreans.The legend of Heracles is also present at Delphi, when the great hero stole the "Tripod of the Oracle". This legend is depicted in various art forms. In Delphi the east pediment of the Siphnian Treasure House, which is now in the Delphi Museum, shows the struggle between Heracles and Apollo, and Athena acting as go between. There are also fine examples of pottery showing this image.

The Delphic Oracle, known as the "Pythia". This priestess would be seated on a tripod (Apollo's symbol of prophecy) in a state of trance, the position of the tripod was situated above a fissure in the floor of the temple, from which arose strange hallucinating vapors. She would also be chewing laurel leaves, while in this trance she only mumbled her answer, which a high priest would translate into Apollo's prophecy. Before this took place the supplicants (male only), which were known as Theopropes, had to be purified in a ritual washing ceremony which took place in the Castalian Spring. The Pythia also had to purify herself in the same manner before she performed her duties. The consultation would begin with a ritual sacrifice of an animal, but if the offering was not in a favorable condition and if cold water sprinkled onto the animal made it tremble the supplicant and the animal were turned away. From here the petitioners would enter the sanctum of the temple. Here the question, which had been previously written, was handed to the priest, who in turn asked the Pythia for Apollo's answer. From her sometimes garbled muttering, the priest would translate into hexameter verse. The Pythia never gave a straight answer, Heraclitus the philosopher (circa 500 BCE) said. The oracle neither conceals nor reveals the truth, but only hints at it. The historian Herodotus gave an account of this when he reported of king Croesus of Lydia (circa 546 BCE) who asked if he should invade Persian territory. His reply from the oracle was, if he did invade a mighty empire would be destroyed. Croesus thinking he would be victorious invaded, but it was his own empire that fell and subsequently destroyed.

Every four years Delphi held the Pythian Games, originally they were held every eight but in 582 BCE. The games were reorganized, which took place in the third year of each Olympiad. This festival comprised of musical and athletic events. The music events were in honor of Apollo and Dionysus and took place in the theatre which held 5,000 spectators. The highest place on the slopes of the sanctuary is the stadium, here 7,000 spectators could watch the games. All types of event took place from running to chariot racing, the museum houses the famous statue found in Delphi called the "Charioteer".

The archaeological finds from Delphi has given archaeologists and historians much information, especially from the inscriptions found in abundance around the site. There are hymns to Apollo, lists of officials and even statements regarding temple money written either on walls or stone slabs. The ancient site of Delphi has a lot to offer in regard to giving an insight of ancient Greece but also the mythology attached to it.
Αναρτήθηκε από Unknown Δεν υπάρχουν σχόλια: 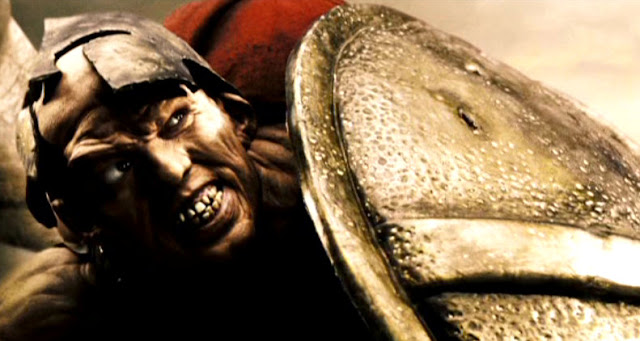