The Ambiguity of Oracles

The reputation of some oracular sanctuaries endured for a thousand years, and this demonstrates that the Greeks believed in oracles and warning signs. Many inscriptions record acts done ‘‘in accordance with the will of an oracle,’’ confirming the literary tradition,and examples of people disobeying oracles they have been given are exceptional.The skeptical Thucydides and in his wake Polybius never doubted the authority of the Delphic oracle,even if he emphasizes the frequent manipulations of the prophecies given, and the consequences of this on the course of events.Plato, as a good pupil of Socrates, was of the same view, and very few and far between were those who denied the principle of divination, such as Xenophanes and then the Epicureans. In the Peace of Nicias of 421, the first clause of the treaty specified free access to Delphi for the opponents. Three substantial and related problems confronted the Greeks : the ambiguity of oracles, charlatanism and the forgery of oracular responses.The ambiguity of oracles derived from two things: the mode of revelation itself and errors made in the process of prediction. The cry of an owl, heard on the left, a dream, or the words of the Pythia at Delphi are naturally vague and always leave room for doubt and interpretation.The medium too,a finite human being, was an inadequate instrument for authentic revelation.As for erroneous predictions, unless one actually believes in Apollo, one must admit a real percentage of error. But the Greeks could not consider their gods liars. The reconciliation of this contradiction entailed accepting the possibility of human error in the decoding of oracles: the responses of the gods, truthfully spoken, were accordingly considered ambiguous, ‘‘oblique.’’ Sophocles’ Oedipus does not understand the oracles and becomes embroiled in misfortune. Herodotus’ Croesus (1.46–91) is told by the Pythia that if he takes up war against Persia he will destroy a great empire. In his defeat he destroys his own kingdom.

Human error was the only possible explanation from the moment that belief in divination became fixed in Greek patterns of thought and was justified by tradition, which the Greeks seldom deviated from.Accordingly, ambiguity soon became established as the hallmark of oracles in literature, even though epigraphic cases are quite rare.On top of error came charlatanism. Prediction was trustworthy, but some predictions were more trustworthy than others. First in rank came the infallible oracles,whose power was guaranteed by their antiquity: Delphi, Dodona, Olympia, Siwah, then Claros and Didyma, amongst others. Faith in oracles was confirmed by the legendary  punishment inflicted upon Croesus, who tested them to ensure their truthfulness.Also reliable were the oracles that offered a personal contact, an ‘‘autopsy,’’ with the divinity, a characteristic that was an ancient one, but one that became essential in the hellenistic period.By contrast, at the bottom end of the divination scale languished itinerant diviners, interpreters of oracle collections gathered under the name of the great seers of the past, such as Musaeus, Orpheus, or Bakis, the content of which evolved to meet the needs of each age.Aristophanes,Euripides, and Sophocles, as well as Thucydides, Plato, and the Cynic Diogenes, not to mention Artemidorus, the expert in the interpretation of dreams, all alike reviled them, which is proof enough of their success with the masses. Since they needed to
live by their craft, they often found themselves with conflicting interests.Between these two extremes fell amyriad of local divinatory institutions Boeotia alone had more than ten of them as well as publicly recognized diviners in the service of the city or of armies,rituals were essential prior to combat. The city of Athens awarded a crown to the diviner Cleobulus, the uncle of Aeschines, for his services during the campaign against Chilon.When he was on campaign Xenophon, a witness representative of many learned Greeks,accepted the significance of signs, whatever they were, without raising an eyebrow and often sacrificed to obtain omens (but he also denounced a diviner who acted to his own advantage

From the time of Homer Greek thought was divided between unshakeable faith in divination and developing skepticism. In criticizing Calchas and Helenus, who should have seen things that they had not, and in rejecting certain types of divination, the messenger of Euripides’ Helen is representative of a trend (his ideas recur at Thucydides 8.1, where the crowd reproach the diviners for their misleading advice after the Sicilian disaster):‘‘Reason,’’ he concludes, ‘‘is a better diviner, as is soundness of judgment.’’Euripides is difficult to use, because the prophecies that are most heavily criticized in his works come to pass against all expectation. But the lively debates that divided the Greek elites emerge clearly from an inscription dedicated to the dead of the battle of Coronea, shortly after 446 BC: the Athenian general appears to have acted in spite of an unfavorable sign, thereby demonstrating the authenticity of oracles, for all that some held them in disdain.This curious mixture of unshakeable faith and skepticism could often be found within the same individual. Once the principle of divination had been accepted,one tried to limit the possibilities of abuse or error. As with Croesus in the legend,the Greeks posed their questions in such a form as to reduce ambiguous factors to the minimum. Xenophon asked at Delphi not whether he should join Cyrus’expedition, but to which gods he should sacrifice to make a success of it .The Corcyreans asked at Dodona what gods they should worship in order to maintain harmony.The response to this kind of question is never false. The prophet-interpreters could perhaps shape the god’s responses, but the consultants acted in the same way, by presenting their question in the form of an indirect inquiry: ‘‘Cleoutas asks Zeus and Dione if it is profitable
and advantageous for him to rear sheep’’

Both sides, unawares, refined a system of consultation that justified the truthfulness of oracles whilst allaying people’s anxiety. Thus, the responses to a question of the type according to which one wishes ‘‘to know whether one should cultivate the land’’ will be 100 percent valid, because one will never know what the course of action dismissed by the Pythia would have brought. The response to a question of the sort ‘‘whether one will marry’’ is more critical. But across the board erroneous responses could not be expected to have exceeded 50 percent.The oracles accordingly responded in satisfactory fashion to at least 75 percent of questions with ‘‘whether.’’ In other cases, where the oracle responded, for example, with a riddle, the answer was deduced by the consultant himself, with a risk that any error could imputed to him. Next, the consultant often triangulated his inquiry to glean further indications and to form a more credible convergence: a dream could be confirmed by another dream, a prodigy by the examination of a victim’s entrails, or by a coincidence.And at the heart of mantic rituals, several divinatory sacrifices sanctioned the god’s good disposition towards the petitioner. Numerous instances, legendary and historical, display the confirmation of one oracle by another: thus in 388 BC King Agesipolis, having obtained a favorable oracle at
Olympia, protected himself by obtaining an analogous response from Delphi before invading the Argolid 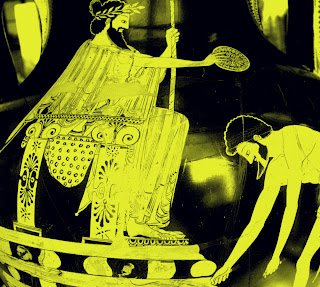 This mixture of credulity and reason brings us to the counterfeiting or falsification of oracles. An improbable number of historical events were predicted by oracles that are today cataloged in literary sources: unless we believe in the percipience of the Greek gods, an enormous majority were responses forged after the fact, or post eventum, as we say. It must be stated frankly that these texts are bogus, and constitute one of the problems the historian must deal with.This does not mean that these texts are without interest. Quite the reverse. The Greeks, first of all, regarded them as authentic, and they therefore exerted a historical impact. Further, these post eventum oracles tell us about the patterns of thought of the period that invented and disseminated them. Whether they were put into circulation by the sanctuaries themselves, or with their approval, or simply without them being able to do anything about them, these bogus oracles were not so much designed to deceive as to demonstrate the supreme oracular power of the gods. To this extent, the 500 or so Delphic responses cataloged are less valuable for their historicity than for the image they present, reinforcing the idea that the Greeks wanted to project of their principal oracle.One often reads in modern scholarship that the Pythia colluded with the powers of the day: we will return to this claim.In an oral society, bogus oracles could immediately present themselves as authentic soon after the event, and it is not necessary to see in them the result of interested calculation. They should rather be compared with myths that offer infinite possibilities of adaptation to the social needs of the moment. Thucydides shows this phenomenon at work during the plague of 430 BC: ‘‘people naturally turned to their memories, recalling the verse that the oldest people said had been recited previously: ‘A Dorian war will be seen to arrive, and with it the plague.’ In fact, there was disagreement.The word that featured in the verse, it was contended, had not been loimos [plague] but limos [famine]. However, the view that naturally prevailed was that the word had been ‘‘plague.’’ People thus conditioned their memories in accordance with what happened; and if, I imagine, another Dorian war presents itself after this one and there is a famine in it, it is naturally under this form
that they will make the quotation’’
Αναρτήθηκε από Unknown