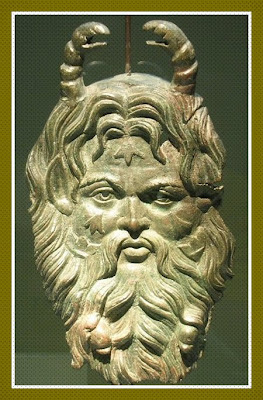 Oceanus was the son of Uranus and Gaia. He was the personification of the ever-flowing stream, which, according to the primitive notions of the early Greeks, encircled the world, and from which sprang all the rivers and streams that watered the earth. He was married to Tethys, one of the Titans, and was the father of a numerous progeny called the Oceanides, who are said to have been three thousand in number. He alone, of all the Titans, refrained from taking part against Zeus in the Titanomachia, and was, on that account, the only one of the primeval divinities permitted to retain his dominion under the new dynasty.

Nereus appears to have been the personification of the sea in its calm and placid moods, and was, after Poseidon, the most important of the sea-deities. He is represented as a kind and benevolent old man, possessing the gift of prophecy, and presiding more particularly over the Aegean Sea, of which he was considered to be the protecting spirit. There he dwelt with his wife Doris and their fifty blooming daughters, the Nereides, beneath the waves in a beautiful grotto-palace, and was ever ready to assist distressed mariners in the hour of danger.

Proteus, more familiarly known as "The Old Man of the Sea," was a son of Poseidon, and gifted with prophetic power. But he had an invincible objection to being consulted in his capacity as seer, and those who wished him to foretell events, watched for the hour of noon, when he was in the habit of coming up to the island of Pharos, with Poseidon's flock of seals, which he tended at the bottom of the sea. Surrounded by these creatures of the deep, he used to slumber beneath the grateful shade of the rocks. This was the favourable moment to seize the prophet, who, in order to avoid importunities, would change himself into an infinite variety of forms. But patience gained the day; for if he were only held long enough, he became wearied at last, and, resuming his true form, gave the information desired, after which he dived down again to the bottom of the sea, accompanied by the animals he tended.

TRITON and the TRITONS

Triton was the only son of Poseidon and Amphitrite, but he possessed little influence, being altogether a minor divinity. He is usually represented as preceding his father and acting as his trumpeter, using a conch-shell for this purpose. He lived with his parents in their beautiful golden palace beneath the sea at Ægea, and his favourite pastime was to ride over the billows on horses or sea-monsters. Triton is always represented as half man, half fish, the body below the waist terminating in the tail of a dolphin. We frequently find mention of Tritons who are either the offspring or kindred of Triton.

Glaucus is said to have become a sea-divinity in the following manner. While angling one day, he observed that the fish he caught and threw on the bank, at once nibbled at the grass and then leaped back into the water. His curiosity was naturally excited, and he proceeded to gratify it by taking up a few blades and tasting them. No sooner was this done than, obeying an irresistible impulse, he precipitated himself into the deep, and became a sea-god.Like most sea-divinities he was gifted with prophetic power, and each year visited all the islands and coasts with a train of marine monsters, foretelling all kinds of evil. Hence fishermen dreaded his approach, and endeavoured, by prayer and fasting, to avert the misfortunes which he prophesied. He is often represented floating on the billows, his body covered with mussels, sea-weed, and shells, wearing a full beard and long flowing hair, and bitterly bewailing his immortality.

The silver-footed, fair-haired Thetis, who plays an important part in the mythology of Greece, was the daughter of Nereus, or, as some assert, of Poseidon. Her grace and beauty were so remarkable that Zeus and Poseidon both sought an alliance with her; but, as it had been foretold that a son of hers would gain supremacy over his father, they relinquished their intentions, and she became the wife of Peleus, son of Aiacus. Like Proteus, Thetis possessed the power of transforming herself into a variety of different shapes, and when wooed by Peleus she exerted this power in order to elude him. But, knowing that persistence would eventually succeed, he held her fast until she assumed her true form. Their nuptials were celebrated with the utmost pomp and magnificence, and were honoured by the presence of all the gods and goddesses, with the exception of Eris. How the goddess of discord resented her exclusion from the marriage festivities has already been shown.Thetis ever retained great influence over the mighty lord of heaven, which, as we shall see hereafter, she used in favour of her renowned son, Achilles, in the Trojan War.When Halcyone plunged into the sea in despair after the shipwreck and death of her husband King Ceyx, Thetis transformed both husband and wife into the birds called kingfishers (halcyones), which, with the tender affection which characterized the unfortunate couple, always fly in pairs. The idea of the ancients was that these birds brought forth their young in nests, which float on the surface of the sea in calm weather, before and after the shortest day, when Thetis was said to keep the waters smooth and tranquil for their especial benefit; hence the term "halcyon-days," which signifies a period of rest and untroubled felicity.
Αναρτήθηκε από Unknown