Phaethon the son of Helios 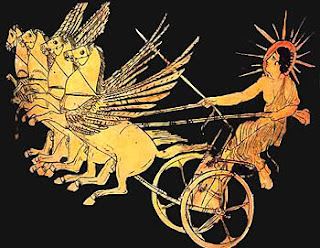 Phaethon was the son of Helios the Sun-god, and the Oceanid Clymene, who was the wife of the Egyptian king Merops. Our bestknown version of Phaethon's fate is found in Ovid Metamorphoses.When Phaethon wished to be reassured about his parentage, Clymene sent him to his father's palace in the far east, at the rising of the sun. Here Helios confirmed that Phaethon was indeed his son and promised to grant him anything he might desire.Phaethon asked to drive his father's sun-chariot across the sky for just one day. The god, fearful for his son's safety, tried to dissuade him, but nothing could quell Phaethon's enthusiasm and Helios was forced to stand by his word. With many anxious instructions from his father, Phaethon climbed into the chariot and the four horses set off, galloping into the air. All too soon they raced out of control,dragging the chariot and the terrified boy completely off course, now soaring up close to the stars, now hurtling down too near the earth.He set the heavens on fire, creating what we call the Milky Way.Scorched by the intense heat the earth caught fire too.Rivers dried up and the seas contracted. Because of this heat and drought the skins of the Ethiopians were burnt black and North Africa turned into a desert.

To save the world from complete destruction, Zeus hurled Phaethon from his chariot with a thunderbolt and his blazing corpse fell into the River Eridanus. Here his mourning sisters came, the Heliades, and as they stood weeping ceaselessly on the banks they were turned into poplar trees, and their tears into amber.Cycnusthe musician-king of the Ligurians, also came to mourn for Phaethon. He wandered the banks singing of his loss until he was turned into a swan.Ovid's version of Phaethon's story seems to have been similar in many respects to that of Euripides in his lost tragedy Phaethon, where the still-smoking body of the dead boy was carried onstage at the end of the play. Aeschylus also wrote a tragedy on the subject, The Heliades, that is now lost, where Phaethon's sisters made up the Chorus.Here, however, it seems likely that Phaethon was the acknowledged Phaethus a son of Helios, living in his father's palace. When his request to drive the chariot was refused by his father, the Heliades secretly yoked it for him. Thus they had even more reason to mourn when their brother met so terrible a death.To commemorate his sad fate, Phaethon was after his death immortalised in the stars as the constellation Auriga, the Charioteer.The River Eridanus also became a constellation, stretching far through the sky to the west of Orion.

In Plato's Timaeus, Critias tells the story of Solon's visit to Egypt shortly after Solon was elected archon in 594 B.C. Solon was puzzled by the fact that the Greeks had no history prior to the Trojan War and told the Egyptians that history must begin with the first man called Phoroneus and the first woman Niobe and after the Deluge with Deucalion and Pyrrha. To which the Neith priest, identified by Plutarch as Sonchis the Saite, said, in mind you are all young; there is no old opinion handed down among you by ancient tradition, nor any science which is hoary with age. And I will tell you why. There have been, and will be again, many destructions of mankind arising out of many causes; the greatest have been brought about by the agencies of fire and water, and other lesser ones by innumerable other causes. There is a story, which even you have preserved, that once upon a time Paethon, the son of Helios, having yoked the steeds in his father's chariot, because he was not able to drive them in the path of his father, burnt up all that was upon the earth, and was himself destroyed by a thunderbolt. Now this has the form of a myth, but really signifies a declination of the bodies moving in the heavens around the earth, and a great conflagration of things upon the earth, which recurs after long intervals."

Phaethon's tragic story would seem to cry out for visual treatment, but it was rarely illustrated in ancient art,and then only very late. It did, however, prove inspirational to many postclassical painters, and there are versions of The Fall of Phaethon' by Michelangelo, Tintoretto, Rubens and Jan Brueghel the Younger, among many others. Phaethon's name has been given to the phaeton,a light fast-moving open carriage, drawn by a pair of horses.
Αναρτήθηκε από Unknown