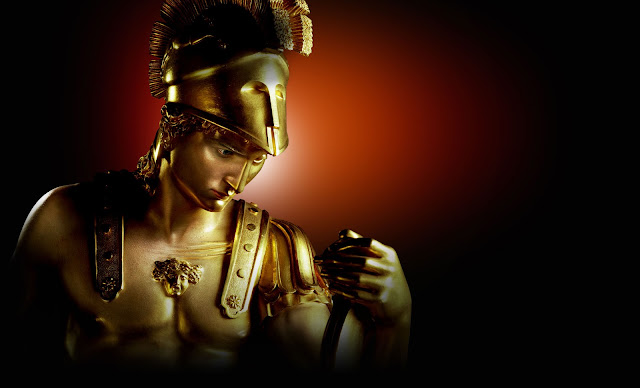 Alexander III of Macedon (356–323 BCE) owes his epithet ‘the Great’ to the enormous territory that he dominated: from Greece in the west to the river Indus in the east, resulting in, at the time, the largest empire in antiquity. This is all the more remarkable when we recall that he subjugated this vast region within just eleven years, and that he was only 20 years of age when he came to power.Many believed that someone who ruled the ‘whole world’ by the age of 30 must possess superhuman powers. In his historiography, it is not always easy to distinguish reality from myth. From the outset, biographies of Alexander allude to his divine origin. It is not inconceivable that he contributed to these rumours himself. He instructed his court poet and historian Callisthenes to record events as they occurred during his great expedition. These accounts are known to us only indirectly, from later sources. The literature depicts Alexander the Great as a hero, a brilliant general whose audacity, strategic insight and military strength were unequalled. But he also emerges as a man with an unbridled temper; even some of those closest to him paid for it with their lives. In the Greek, Roman, and later Western literature, he has remained Alexander the Great. In parts of the Far East, however, he has been known as Alexander the Terrible.

Alexander was the son of King Philip II of Macedon. The Macedonians claimed descent from the hero Heracles, son of Zeus. They considered themselves Greeks.Philip, who came to the throne in 360 BCE, did much to promote Macedon’s stature. He patronised the arts, stimulated the economy, and organised an unprecedented strong professional army. In his reign, Macedon became the greatest power in the region. He united the whole of Greece and he placed the previously autonomous Greek city-states under his rule in the Pan-Hellenic League. He married a series of princesses from the defeated territories for political motives, seeking to assure himself of their allegiance. Alexander’s mother, Princess Olympias of Epirus, was the fourth of Philip’s seven wives.

Alexander was born around 21 July 356 BCE. He saw little of his father who, as both king and general, was constantly away on some military campaign. Alexander stayed behind with his mother Olympias, who was surely happy with this arrangement, since she is said to have grown to hate her husband more and more with the passage of time.Philip had arranged for his son to receive a Greek education: the boy’s early training was in the hands of Leonidas of Epirus, while his teenage years were entrusted to the celebrated philosopher Aristotle. As he grew up, his great examples were the Greek heroes Achilles and Heracles, whom he would frequently honour on his campaigns with sacrifices and games. Homer’s Iliad became a guiding motif in Alexander’s life. He also aspired to the Homeric ideal: to fight for personal success, honour and glory. In those days, the only real hero was a Homeric hero.Even as a young boy, Alexander showed himself to be fearless. A great horse was offered for sale at the horse market. Known as Bucephalus (‘Ox-head’), this creature refused to allow anyone to mount him. It would rear up and kick out. Alexander had noticed that the horse was afraid of its own shadow. He turned it towards the sun and calmed it. After a while he successfully mounted Bucephalus and rode him. Philip was moved by the sight, and bought the horse for Alexander. Bucephalus served Alexander faithfully in the years that followed, until he died from battle wounds in 326 BCE.At eighteen years of age, Alexander was allowed to prove his worth in combat. He was placed in command of the army at the decisive battle against Athens, at which he showed himself to be a highly capable leader despite his youth. Macedon carried the day, and Philip became leader of all Greece. The autonomy of the Greek city-states was no more.If Alexander had expected his father to reward him for his courage, he was soon disillusioned. He was not given any part to play in the rest of Philip’s plans. Instead, he was to serve as regent in Macedon while his father was away fighting.

Not long afterwards, Philip was assassinated. It was rumoured that Olympias and Alexander were behind this assassination, but we cannot know whether there was any truth in such stories. In any case, Alexander was ready to ascend to the throne. There was an elder half-brother, from one of Philip’s previous wives, but he was seen as weak. Alexander ensured that all the others who had any claim to the throne were killed, leaving no opposition to his rule. This exemplifies Alexander’s ruthlessness, which spared nothing and no one, as he would demonstrate many more times after that. In 336 BCE, at 20 years of age, Alexander was King of Macedon and hegemon (leader) of the Pan-Hellenic League of Greek city-states. He surrounded himself with his father’s most loyal generals and with his boyhood friends, all of whom he would appoint to high-ranking positions in his army. One of them was Hephaestion, Alexander’s best friend.When Philip died, the Greek city-states and the other territories he had subjugated saw an opportunity to regain their autonomy and rebelled. Alexander, who had inherited his father’s strategic insight as well as the strongest army in the region, restored his power with considerable violence, and sometimes with diplomacy.With every rebellion – and there were plenty – Alexander’s battle-readiness and strategic understanding proved so superior that all resistance was quickly crushed.He had gone through his trial by fire as king and as general, and had emerged triumphant. In 335 BCE the rebellion in Thebes briefly appeared to be succeeding, but that too was put down. By way of punishment and to set a deterrent example to other cities, Thebes was destroyed. The strategy worked: Greece remained calm until Alexander’s death in 323 BCE.
Αναρτήθηκε από Unknown