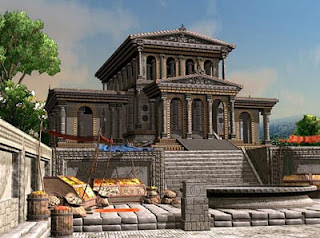 The achievements of the Greeks in the ancient world, by no means few, may have reached their peak in the city of Alexandria. No less a ruler than its namesake, Alexander III of Macedonia (Alexander the Great), Alexandria dominated the eastern Mediterranean world culturally, politically, and economically for more than nine hundred years, the latter three hundred of which it competed with even the eastern capital of the Byzantine Empire, the famous Constantinople. Few cities in the world can claim success of this magnitude for close to millenium, and even fewer still flourish to this day. Part of the reason for Alexandria's success was its location, both geographically as well as politically. Situated on the coast of the Mediterranean, it was the true bridge between Europe and Africa while still being a world all to itself. It was largely separate from the political upheavals of the Hellenistic kingdoms, and then later shaded by the Pax Romanum, as well as being quite far from the chaos of the barbarian invasions that contributed to the fall of the Roman Empire. Freed from many of the fetters that chafed against its peers, and enriched by both maritime trade and its Greek intellectual tradition, Alexandria soon earned the title "Queen of the Mediterranean."

Part of Alexandria's power and majesty came from its status as the new capital of Egypt. In 320 BC it replaced Memphis as the seat of rulership for the Ptolemaic dynasty and it remained so throughout the Byzantine period. The rest was largely due to its monopoly on the papyrus industry for the entire Mediterranean world, as well as its hold on the manufacture and export of medicines, perfumes, jewelry, and art. Additionally, many materials and goods prized by the ancient world from the east came into Alexandria and were exported from there.

The arrival of the Greeks brought an unprecedented amount of change in Egypt as they overlaid the existing society with that of their own. At first glance, the Græco-Macedonian period seems to lack the romance and awe of the Pharaohs who came before, but it was during this time, between Alexander's conquest and the Arab takeover of Alexandria in AD 642 that Egypt made some of its most significant contributions to the classical world, as well as absorbing its influences. Change came in many sectors of Egypt and Egyptian life. A new system of roads and canals was created which, coupled with the Nile travel already mastered by the Egyptians, resulted in the ability to move goods and people all over the Nile Valley and the Delta like never before. Better travel resulted in better communications across Egypt, which in turn resulted in greater military security as well as the faster spread of new cultural and social patterns.

Alexander the Great took Egypt from the Persians in 332 BC and made it a part of the the Greek Empire. In the first part of 331 BC, shortly after being crowned Pharaoh in Memphis, he sailed northwards down the Nile and there, prompted by a dream, he began his most lasting contribution to civilization. On the natural harbor near Rhacotis he built a fortified port and named it, in a moment of egotism, Alexandria. Alexander then connected the island of Pharos, located in the center of the bay, to the mainland with a 1,300-meter causeway, the Heptastadion. Thus two great harbors were created for his city and towering over it all, the Pharos Lighthouse, one of the Seven Wonders of the Ancient World. Yet Alexander, true to his nature, did not say long enough to see a single building built of his new city. Instead, he traveled to Siwa and then back to Memphis before setting out on his conquest of Asia. He never returned, dying in Babylon at the age of 38. 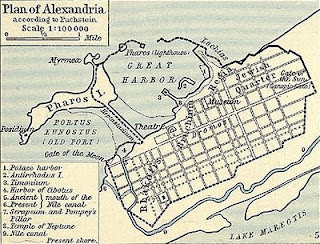 Following Alexander's death, his generals divided the Empire, each setting up their own kingdoms. One of them, Ptolemy, took Egypt as his share and made Alexandria his capital, ruling as Ptolemy I Soter and thus established the last dynasty that would rule Egypt with the title of Pharaoh. He brought Alexander's body with him to be buried in the city, reuniting the famed conqueror with the city that bore his name. For the next two-and-a-half centuries, the Ptolemaic dynasty of the Greeks would successfully rule Egypt, mingling Hellenic traditions with the mighty legacy of the Pharaohs.

It was under the Ptolemaic Dynasty that Alexandria truly became the cultural and economic center of the ancient world. Egypt was ruled from Alexandria by Ptolemy's descendants until the death of Cleopatra VII in 30 BC. The early Ptolemies raised the quality of Egyptian agriculture by reclaiming cultivatable land through irrigation and introduced crops such as cotton and better wine-producing grapes. In addition, they increased the wealth of their population by increasing foreign trade, making more luxury goods available to more people. In return, Egypt enriched their lives as the new rulers absorbed their adopted culture. Egypt had enchanted the Ptolemies, as it had all its foreign rulers before them. Ptolemy and his descendants adopted Egyptian royal trappings and added Egypt's religion to their own, worshipping the gods of Eternity and building temples to them, and even being mummified and buried in sarcophagi covered with hieroglyphs.

This adoption of Egyptian culture was really the secret to Ptolemy's rule (and that of his descendants). Alexander came and left, burning with the desire to bring the rest of the world under his influence, but Ptolemy saw a need to become one of the people he intended to rule. Indeed, the famed Satrap Stele, on which is carved a decree from Ptolemy from the same period as his installation as ruler reads, "I Ptolemy, the satrap, restore to Horus, the avenger of his father, the territory of Patanut [Egypt], from this day forth for ever..." In addition to showing respect for the Egyptian religion and beliefs (something previous conquerors had failed to do), this inscription reminded the people exactly who it was who had liberated Egypt from the Persian Empire, thus ensuring much support for the new ruler and the dynasty that would follow him. 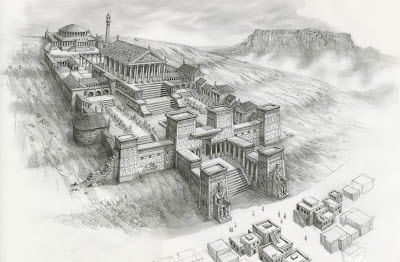 This was quite literally a golden age for the citizens of Alexandria, and for Egypt as a whole. Although Alexander never lived to see its glory, it nevertheless became the racial melting pot he is said to have wanted for his capital city. Ptolemy decided early on that Alexandria would be not just another port capital, but the home of a new age in Greek science and art. It may seem surprising to find such an impulse in a military man, but Ptolemy was more than just another general. He was a great writer of histories, including detailed accounts of Alexander's campaigns, and this love for learning did not die with him. Ptolemy's son and heir, Ptolemy II Philadelphus, for instance, had a passion for science, and Ptolemy III as we shall see, was a manic collector of books. The Greeks had long had a tradition of enlightened rulers, and despite being on foreign soil, the Ptolemies would be no exception. Ptolemy invited scholars and artists from all over the known world to come to Alexandria, not to be mere court window dressing, but to foster the learning culture of Alexandria. The arrival of many of these learned people, and later the successors they found amongst the citizens of their new home, resulted in one of the most famous images of historic Alexandria: the Library.

The Library at Alexandria was conceived largely as an attempt to bring together in Alexandria the whole of the earlier Greek science, art, and literature. Ptolemy I, though respectful as he was of the Egyptian culture, nevertheless believed the Greek culture to be superior in many respects, and thus the preservation of it in Alexandria was of utmost importance. The models for this project may very well have been the research center created by Aristotle at the Lyceum, as well as Plato's Academy. Between these two centers of learning, later joined by the Library, something very close to the modern university was being created, for these centers did not just archive information, they made it accessible to those who sought it, and in return, added to it. And add to it they did. At one point the Library held close to fifty thousand books, not much when compared to the university libraries of today, but for the ancient world it is an astonishing number.

It was the mission of the librarians, as well as of those rulers who supported it, to rescue and archive all Greek knowledge and to obtain copies of every known work. Stories abound about Ptolemy III Euergetes I, grandson of Ptolemy I, who seized cargoes of books from ships docked at Alexandria, had copies made of each volume, returned the copies to the shipmasters and kept the originals for the library. He also borrowed the complete works of Aeschylus, Euripides, and Sophocles from the Athenian collections and never returned them. Yet this is not to say that the Ptolemies hoarded knowledge. The libraries were open to all those who could read and who wished to learn. And learning was easy indeed thanks to the widespread teaching of the Greek alphabet. With only thirty symbols, as compared with the multitudes of hieroglyphs, virtually anyone could learn it, and almost everyone did. A new age of learning had dawned, and Alexandria stood at the bulwark of it. 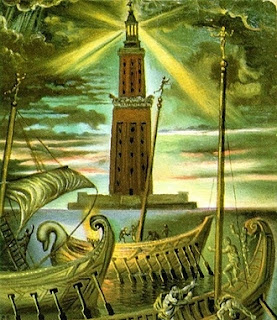 The eventual fate of the Library is unknown. A significant portion of it is said to have been destroyed during Julius Caesar's war against Pompey, though how significant this portion was, or even the size of it, is not certain. The Library may have perished during the 270s, along with the palace quarter. At the very least, it does not appear to have existed at the time of the Arab conquest in the seventh century AD. Stories do abound, as they always will, that part of the library was rescued and remains hidden, waiting to be discovered.

For the next three centuries the Ptolemaic Dynasty would hold sway over Egypt, surviving both family feuds and external conflicts while living an unusual combination of Hellenic and Egyptian life. And under them Alexandria grew mighty and prosperous, the center of an empire that extended around the coast of Syria to the Aegean Sea. In fact, if Alexandria had been any more prosperous, it might have replaced Rome as the center of the world, as Rome was neither as strategically located nor as culturally diverse. But all this is not to say that Alexandria was a city completely at peace with itself. With the large numbers of people and cultures coming through the city, it was inevitable that conflict would arise. Certainly racial tensions, by no means an invention of the twentieth century, played a strong part. Additionally, a number of more tradition-minded Egyptians resented the presence of the Greeks, nations brought their feuds with them to the streets and businesses of Alexandria, and there was always the wildly unpredictable Alexandrian Mob to lend spice to things.

Little by little however, the glory days of the early Ptolemies came to an end. The later successors to the throne did not live up to the standards set by their forebears and moreover, internal strife took its toll. The Egyptians grew more restless year by year and finally, beginning in 206 BC, Upper Egypt openly rebelled. Suppressing these revolts took more out of the treasury than the Ptolemies could afford and this, combined with the less-than-sound foreign policy of the later Ptolemies, brought Egypt increasingly under the influence of Rome.
Αναρτήθηκε από Unknown