The Legend Of Perseus 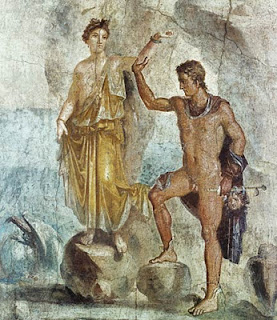 Once there was a king named Acrisius, he had a beautiful daughter named Danae. The oracle of Apollo told Acrisius that Danae's son would one day kill him. Acrisius could not let that happen, so he locked Danae in a bronze tower so that she would never marry or have children.
The tower had no doors, but it had one very small window. Danae was very sad, but one day a bright shower of gold came through the small window. A man appeared, he had a thunderbolt in his hand and Danae knew he was a god, but she didn't know which. The man said, "Yes, I am a god and I wish to make you my wife. I can make this dark prison a wonderful sunny land with many flowers "

All happened as he said, the horrible prison became fields almost as wonderful as the Elysian Fields themselves, but one day Acrisius saw light coming out of the small window. He told his men to tear down one of the walls. He walked into the tower and saw Danae with a baby on her lap, smiling she said, "I have named him Perseus." Acrisius was furious, he shut Danae and baby Perseus up in a large chest and cast them out to sea. 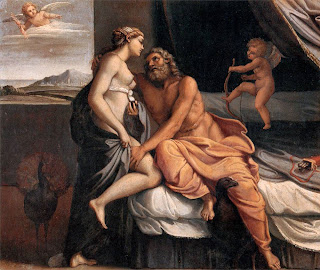 Somehow they got safely to the island of Seriphos where Polydectes was king. The kings brother who was a fisherman, caught them in his net and pulled them to shore, his name was Dictys. Perseus grew up to become a strong young man. Polydectes heard about Danae and wanted her to marry him, but she rejected him. Polydectes would have married Danae by force if Perseus wasn't there to protect her.

Polydectes decided on a plan to get rid of Perseus. Polydectes pretended to be marrying a daughter of a friend of his. Everybody had to bring a present, including Perseus. Polydectes pretended to be furious when Perseus arrived empty-handed, for he was not only very strong and brave but very poor. "What, no wedding present?" yelled Polydectes. " I don't have any money." exclaimed Perseus. " That's what you get for a lazy good-for-nothing." said Polydectes. Perseus was furious. "I can bring you any present in the world, anything." he said. "Then bring me the head of the gorgon Medusa!" replied Polydectes. "Fine!" said Perseus.

So he went of on his perilous voyage. For days he wandered, searching for the gorgons lair. One night in an unknown country he realized how hopeless things were. The gorgons were horrible, instead of hair they had black serpents that writhed on their head, they had brazen hands that could have squashed poor Perseus, but worst of all if you looked a gorgon you were instantly turned to stone.

Then suddenly a tall woman and a young man with winged sandals appeared. The man said, "I am Hermes and this is our sister Athena. Yes, you are a son of Zeus. We have some things that may help you in slaying Medusa. Here are my winged sandals and the sickle which Cronos used to overpower Uranus and Zeus used against mighty Typhoeus." "And here is a gifts from me." said Athena, "Use this shield to reflect the image of Medusa so you won't be turned to stone." "You must find the Graeae and get them to tell you how to get to the Nymphs of the North, they will give you the cap of darkness and give you a magic wallet and tell you how to get to the Gorgons' lair." Hermes said. 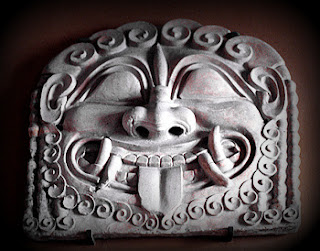 So Perseus went to the cave of the Graeae. The Graeae were strange women, there were three of them having only one eye for all three of them which they constantly fought over. Perseus hid behind some bushes and watched them. When one took out the eye to give to another Perseus sprang from his hiding place and snatched the eye from them. Then he said, "I have your eye and if you don't tell me how to find the Nymphs of the North you shall never have it back!" So they reluctantly told them how to find the Nymphs of the North. He gave them back their eye and flew off on his winged sandals.

The kindly Nymphs of the North gave him the Cap of Darkness which has the power to make it's wearer invisible and the magic wallet. They told him how to reach the gorgons' lair. Perseus went farther north until he found an island surrounded by rocks and statues which used to be men.
Perseus raised his shield and saw Medusa and her sisters asleep, he put on the Cap of Darkness and flew down. He swung the sickle and felt it tearing through sinew and bone. Still looking into the shield, he put Medusa's head in the magic wallet. Medusa's sisters woke up and attacked Perseus. He flew quickly away on his winged sandals and was not hurt. 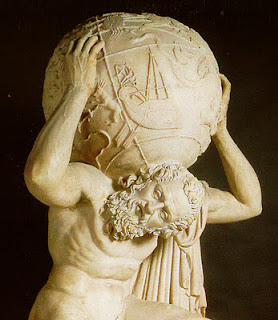 On his way back to Seriphus he had many adventures, one was that when he saw the Atlas holding up the sky Perseus was sorry for Atlas and turned him to stone by showing him the head of Medusa so he could no longer feel the weight of his burden.
Later he saw what looked like a statue chained to a rock, he flew down. He saw that it was not a statue, but a woman. He asked why she was chained to the rock. "My name is Andromeda and I have been punished because of my vain mother. She boasted that I was more beautiful then the Nereids. Poseidon was angered and said that I must be sacrificed to a sea monster," she said. Even as she spoke a monster rose from the sea.

Perseus pulled Medusa's head out of the wallet and the sea monster turned to stone and crumbled to pieces. Perseus cut Andromada's chains and took her to her father, King Cepheus of Phoenicia. When Perseus asked Andromeda's hand in marriage Cepheus gladly agreed. So Perseus - with Andromeda in his arms set off for Seriphus.

On the way they stopped at Larisa so Perseus could compete in some games, but when he threw a discus it hit an old man in the stands who was Acrisius. So the prophecy came true and after mourning for a while Perseus and Andromeda left.

When they arrived at Seriphus, the first person they met was Dictys the fisherman who brought Danae and Perseus to shore after they sailed in the trunk. Dictys told Perseus and Andromeda how Polydectes had never really married, but since Danae wouldn't marry Polydectes, he forced her to be his handmaiden. Perseus was furious. He told Dictys to take care of Andromeda.

Perseus stormed to the palace, walked in and said, "Let all who are my friends shield their eyes!" So saying he raised Medusa's head and Polydectes and his courtiers were changed to statues. Perseus and Andromeda lived happily for many years and their descendants became great kings, but the greatest of these was Heracles the strongest man in the world.

Later Perseus was killed by Dionysus. Perseus and Andromeda were put up in the sky as constellations.
Αναρτήθηκε από Unknown