Honoring the Dead in Ancient Greece 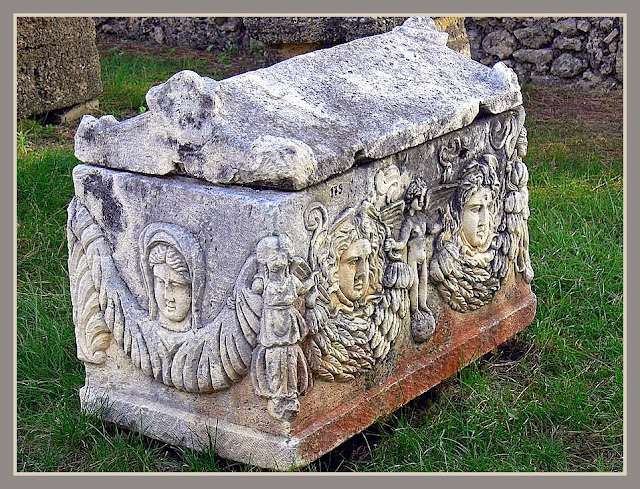 Whether the average Greek believed in the soul or not, he at least believed that certainrites were due to the dead. Death was a passage to be marked with ceremony, and despite the lack of a universal doctrine about the nature of the soul, actual funeral and mourning customs in ancient Greece were relatively uniform.The living needed a way to acknowledge the strangeness of death and a way to comfort each other. So, the Greeks held certain burial rituals to be quite important.And despite the varying attitudes toward the possibility of an afterlife, there existed a widespread belief that if the dead weren’t properly laid to rest their spirits might take revenge and haunt the living. Even if a good number of Greeks didn’t believe in the soul or its survival after death, a pervasive folk-belief in vengeful ghosts might at least be seen as an expression of guilt for failing to observe proper rituals. And, lest individual families failed to tend their ancestors’ tombs, some Greek cities such as Athens held annual state festivals to honor the dead.

The Greeks practiced both inhumation and cremation, though the popularity of one method or the other varied over place and time. For example, archaeological evidence indicates that throughout Greece, and in Mycenae in particular, inhumation prevailed from ca. 1650 to ca. 1200 BC. At this point, cremation became popular,and was even preferred in Attica until ca. 900, when it was replaced by pit burials. In the archaic period cremation grew more popular again, but evidence from the classical period seems to show no preference, although in fifth-century tragedy cremation remained the usual method for disposal of the dead.In the hellenistic period inhumation prevailed.The manner of disposal was perhaps less important than the accompanying rites performed over the body. Ninth-century Greek geometric vases left as grave goods in the Kerameikos depict mourning rituals such as a body lying on a bier surrounded by women tearing their hair, or a body being carried out for burial. In the eighth-century Iliad (which also preserves some traditions of earlier periods) King Priam risks journeying to the Greek camp to beg Achilles for the body of Hector, and the epic ends with Hector’s funeral. In the fifth century, Sophocles’ Ajax and Antigone ‘show how a dead person’s relatives will risk or suffer death, rather than leave a body unburied’, in the Antigone even a symbolic burial, the scattering of dirt on a body, sufficiently honors the heroine’s dead brother.

A typical Greek burial ritual included several stages, in which the women of the family played a prominent role. First came the ‘laying out’ of the corpse, or prothesis, during which the women would wash the body, anoint it, dress it by wrapping it in cloth, and lay it on a bier for the family to perform the traditional lament and pay their last respects (Kurtz and Boardman 1971:144; Garland 2001:23–31). Once coinage became widespread, in the sixth century and later, a coin was placed in the mouth or hand of the deceased to symbolize payment for Charon, the mythological ferryman who rowed the dead across the river Styx, the final boundary between the living and the dead. After the prothesis, which lasted one day, the body would then be transferred at night to its burial site in a formal but quiet procession, the ekphora or ‘carrying out’ of the body, accompanied by mourners and torches.At the cremation or burial site the family would make offerings of food, wine, olive oil, and various household possessions – such as weapons for the men or jewelry for the women – burning or burying them with the body, the idea being, at least in part, that the dead person might have use for these items in the afterlife. The funeral would end with a family banquet in honor of the dead, the perideipnon, or ‘‘feast around,’’ though the banquet was held not at the gravesite but back at the family home.The funeral feast usually involved animal sacrifices. This sequence of ceremonies had its origins at least as far back as the Bronze Age, and as far as literary and archaeological evidence admits, the rituals changed little over the entire course of Greek history.

As for where the Greeks buried their dead, that, too, varied, depending on the era and on the circumstances of death. Soldiers fallen in war were buried or cremated at the site of battle. In the Iliad, for example, the Greek warriors, who were far from home, cremated their fallen dead on the battlefield. The Greeks who died in the battle of Marathon in 490 BC were cremated and then interred in a large burial mound at the site, still visible today. But Greeks who died at home were buried in city cemeteries.Today graveyards can be found inside various neighborhoods in most towns and cities, and from the Bronze Age down to the archaic period burials within Greek communities, including inside the Athenian agora, were relatively common. But by the classical period Greek cemeteries were usually placed just outside the city walls, on the roads leading from the cities; 500 BC is the likely date of a ban on burial inside the city walls of Athens.Among other things, although the Greeks did not, in general, understand the concept of contagion, they were nevertheless rightly wary of rotting bodies and believed corpses should be placed out of the way of the living so as not to ‘‘pollute’’ them.Within the cemeteries, Greek families would commonly have their own plots, often along a little path in the graveyard; many examples of this survive in the Kerameikos.In the family plot individual graves would be marked by tombstones, or stelae, inscribed on which would be the name of the deceased. Depending on the wealth of the family, the stele might be a small, simple rectangular stone or an extremely elaborate monument, complete with bas-relief carvings of the deceased and their servants. To honor the dead, or at least their memory, families regularly tended the tombs of their deceased. This included physical maintenance of the gravesite and tombstone as well as observing the anniversary of death by bringing offerings to the gravesite, such as libations of milk and honey. Overall, this ‘‘cult’’ of the dead – mourning and burial rituals, maintaining the gravesite, and particularly the offerings at the tomb – suggests a belief that the dead were somehow present and active at their graves or under the earth in general, and might somehow watch over the living. More than that, though, visits by relatives to family graves, then as now, would reunite living and dead – ancestors and descendants – allowing the living to show respect for and remembrance of the dead, and allowing the survivors to share their grief and comfort each other.

The ancient Greeks’ very strong belief in the necessity of honoring the dead was also reflected in religious customs devoted to the continual appeasement of both those who had already been properly buried and those who had not received the due rites. Although families regularly brought offerings to the graves of relatives on the anniversary of their death, various cities also held community festivals to ensure that the dead would rest in peace and that the living would have peace of mind.The Athenians, for example, celebrated the Genesia, a general state festival during which they honored the souls of the dead. The Genesia took place on the fifth day of the month of Boedromion (toward the end of our September). The name, which comes from the Greek gen- (‘‘race’’ or ‘‘family’’), suggests the festival may have originated as way for individual families to reverence deceased ancestors, but the legendary Athenian lawmaker Solon may have converted it into a national celebration.The Genesia thus may have become an equivalent to the British Remembrance Day or the US Memorial Day, a day on which the state of Athens recognized its debt to the dead, mainly their sacrifice in battle; this would help to explain why the Genesia took place in the fall, at the end of the campaign season,though the Athenians observed the festival not only during war but also during times of peace.Not much specific information survives about how the Genesia was celebrated, but the rituals probably included libations to the dead. Apart from cult festivals to worship dead heroes, such as those who died at Marathon, the Genesia appears to have been the only public festival in Athens devoted solely to honoring the dead. Other states probably had similar festivals of the dead, though we have virtually no specific information about any of them.The one-day Genesia, however, was a relatively minor festival for the dead compared to the three-day Anthesteria. This holiday, the name of which derives from the Greek anthos, or ‘‘flower,’’ was a major festival honoring the god Dionysus, but the last two days, particularly the third day, were devoted to the dead. Unlike the Genesia,during which the Athenians reverenced and remembered their dead, part of the

Anthesteria was evidently intended to appease the dead and avert any evil they might intend toward the living. The Anthesteria took place on the 11th, 12th, and 13th of the month of Anthesterion (our late February/early March), the time in spring when flowers come into blossom. The festival consisted of three phases: the Pithoigia, the Choes, and the Chytrai. On the Pithoigia, the day of ‘‘jar-opening,’’ new wine was tasted and offered to Dionysus.The Choes, or day of ‘‘wine-jugs,’’ the main day of the Anthesteria, included a procession and sacrifices in honor of Dionysus, followed by evening parties to which guests brought their own wine (quite different from the usual Greek symposium, at which the host provided the drink). On this second day of Anthesteria, however, the ghosts of the dead were believed to roam the city and stay until they were intentionally driven away by certain rituals at the end of the festival. Because the living and the dead were supposed to remain separate, as the extramural burials suggested, the possibility of contact with the spirits made the last two days of the Anthesteria ‘‘unlucky,’’ and to avoid pollution by contact with the dead businesses closed,temples shut down, and people stayed home. For protection against the unseen spirits, the Athenians smeared their doors with pitch (to which the spirits would stick if they tried to enter the house) and chewed hawthorn leaves (which were supposed to have some sort of protective quality, perhaps similar to the alleged power of garlic against vampires).

On the third day of the Anthesteria, the Chytrai, or day of ‘‘pots,’’ each family made its own offerings to the dead, cooking a meal of mixed grains in a pot and offering it to chthonic Hermes (Hermes of the underworld) for the sake of the dead.At sunset, the head of the household went through all the rooms shouting, ‘‘Out the door [spirits]! Anthesteria is over.’’ In short, the Greek Anthesteria seems to have served a function similar to Halloween, a night when ghosts are believed to wander the earth. If the spirits are not appeased by the ritual offering of food (‘‘treat’’), they may cause harm to the living (‘‘trick’’). In the case of the Anthesteria, it is not entirely clear how or why the ghosts wandered the earth, or even whose spirits they were,except perhaps for one. On the last day of the Anthesteria a meal was offered to the ghost of Erigone, a legendary maiden who hanged herself after the death of her father Icarius, to whom Dionysus had given the gift of wine.
Αναρτήθηκε από Unknown