Poseidon the Greek God of the Sea 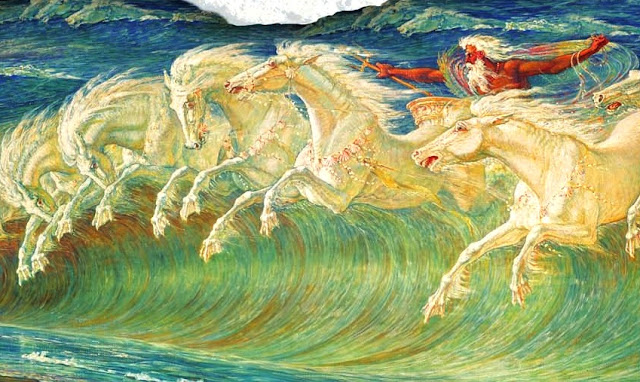 One of the twelve great Olympian gods, Poseidon was the Greek god of the sea whose fearsome rage could bring violent storms and earthquakes on the world. Homer calls him ''Earth-holder'' and as lord of earthquakes,Earth-shaker. He vividly depicts the mighty god as he journeys across his territory {Iliad 13.23-30): He harnessed to his chariot his two bronze-shod horses, swift of foot,with long, streaming manes of gold. Himself clothed in gold, he seized his well-wrought golden whip, then climbing into his chariot he drove across the waves. On every side, from the deeps of the sea, came dolphins,playing in his path, acknowledging their lord, and the sea parted in joy, cleaving a path before him. So swiftly sped the horses that never once was the axle of bronze beneath made wet with foam.

Poseidon was one of the six children of the Titans Cronus and Rhea, swallowed and later regurgitated by his cannibalistic father.When Cronus had been defeated and his three sons divided the universe among themselves, they kept the earth and Olympus as common property, while Zeus took the heavens as his domain, Hades the misty darkness of the Underworld, and Poseidon the seas. According to Homer, there was a time when Poseidon rebelled, conspiring with Hera and Athena to put Zeus in chains. But the sea-goddess Thetis saved him, sending Briareos  to release him.Poseidon vied with Apollo for the love of Hestia, the goddess of the hearth, but she rejected both of them, swearing a vow of eternal chastity. He also vied with Zeus for the love of Thetis, but both gods withdrew their suit when they learnt that she was destined to bear a son mightier than his father. Poseidon's wooing of the Nereid Amphitrite came to a happier conclusion: with the help of a dolphin,who found her when she fled into hiding, he won her for his wife.With her he lived in a splendid golden palace in the depths of the sea. She bore him a son, the merman Triton, and two daughters, Rhode and Benthesicyme. But Poseidon was one of the most prolific of the gods and fathered numerous children on many mistresses. He himself could be violent and vindictive, and some of his sons inherited his dangerous nature, such as the evil Sciron, Sinis and Cercyon,all killed by Theseus; the boxer Amycus, killed by Polydeuces;and the Egyptian king Busiris, killed by Heracles.Some of his formidable offspring were giants, such as the Siamese twins, the Moliones;Otus and Ephialtes, who attempted to take over Olympus;the wrestler Antaeus, who was killed by Heracles; the great hunter Orion; Lamus, who founded the Laestrygonians, a race of maneating giants; and perhaps best-known of all, the Cyclops Polyphemus, who was blinded by Odysseus.

Others of Poseidon's more famous children were the twins Pelias and Neius, whom he fathered on Tyro, taking the shape of the rivergod Enipeus; Libya's three sons, Belus, Agenor and Lelex; Eumolpus,the son of Chione(, who was thrown into the sea by his mother and reared by Poseidon's daughter Benthesicyme; the navigator Nauplius, fathered on the Danaid Amymone while she was hunting for water in Argos; Hippothoon, the son of Alope, who was suckled by a mare and reared by shepherds after Alope was cruelly killed by her father; and of course the great Athenian hero, Theseus, borne to Poseidon by Aethra.
Poseidon was also the god of horses, and in this guise was known as Poseidon Hippios, 'Horse Poseidon'. As a horse he mated with the goddess Demeter, who bore him the divine horse, Areion, and a daughter, Despoina. Medusa was pregnant by him when she was killed by Perseus, and from her severed neck were born the winged horse, Pegasus, and Chrysaor. Poseidon presented wondrous horses to favoured mortals, both to Pelops, to help him win the hand of Hippodameia, and to his son Idas, to help him win the hand of Marpessa. To Peleus he gave as a wedding present the immortal horses Xanthus and Balius, who were later taken by Achilles to fight at Troy. The god showed his favour to other mortals in rather different ways. He made love to Caenis while she was wandering alone on the seashore, then at her own request turned her into a man, Caeneus,and made her invulnerable. He also made his son Cycnus invulnerable, and on his death at Achilles' hands turned him into a swan.He gave to his mistress Mestra, daughter of Erysichtheon, and to his grandson Periclymenus the ability to change their shape at will.Like other sea-deities, Poseidon himself had the power of changing his own shape. He came to Theophane as a ram, and fathered on her the flying, talking ram with the golden fleece which saved Phrixus and Helle from their wicked stepmother Ino, and which later became the motive for the long and arduous journey of Jason and the Argonauts.According to Ovid, Poseidon coupled with Canace, the daughter of Aeolus, as a bull, with Melantho, the daughter of Deucalion,as a dolphin, and with the Gorgon Medusa as a bird.Being a mighty and formidable god,Poseidon sternly punished the mortals who offended him. He was furious with Odysseus for blinding the Cyclops Polyphemus and kept him away from his homeland of Ithaca for many long, weary years; and he punished the Phaeacians, the people of Scheria, for helping Odysseus on his journey.

When Laomedon, king of Troy, refused to pay Poseidon and Apollo the agreed wage for building his city walls, the sea-god sent a sea-monster against the land, which would have devoured Hesione,Laomedon's daughter, had she not been saved by Heracles. Laomedon's offence was the reason for Poseidon's resentment of the Trojans and his support for the Greeks during the Trojan War. He frequently intervened to help his favourites, even against the express command of Zeus. This did not stop him helping Athena to punish the Greeks at the end of the war for the rape of the Trojan prophetess Cassandra by Ajax the sea-god sent violent storms that wrecked the Greek fleet off Cape Caphareus and brought death to many, including Ajax himself.At the Nereid's request, Poseidon sent another sea-monster against the Ethiopians, to punish a vain boast made by their queen, Cassiopeia.This time the monster's victim was to be the queen's daughter, Andromeda, but she was saved by Perseus. Poseidon was also associated with bulls: he brought death to Hippolytus, at the request of his father Theseus, by sending a bull from the sea that caused his horses to bolt and overturn his chariot. He sent as a gift to Minos, king of Crete, a magnificent white bull from the sea, then punished the king for failing to sacrifice it by inflicting on his wife,Pasiphae, a passion for the bull that led to the birth of the Minotaur.Poseidon came into conflict with some of the other gods over the
patronship of certain lands. He and Athena contested the possession of Attica during the reign of Cecrops. Both demonstrated their divine powers, Poseidon by creating a well of sea-water on the Acropolis of Athens, Athena by planting an olive tree. Athena's was judged the greater benefit, so the land became hers. Poseidon in anger sent a flood to cover Attica. He also quarrelled with Hera over the possession of Argos. The river-gods Inachus, Cephissus and Asterion judged the dispute in favour of Hera, and Poseidon, angry once again, dried up their waters. He was more fortunate in the case of Corinth,which he disputed with the Sun-god, Helios. The Hundred-hander Briareos was called in as arbitrator, and he awarded the citadel of
Acrocorinth to Helios and the Isthmus to Poseidon.

Poseidon was worshipped throughout the Greek world and from very early times: his name occurs on Mycenean Linear B tablets more frequently than that of any other divinity. At Rome he was identified
with the sea-god Neptune. He is a popular subject in ancient art, easily recognised by his most famous attribute, the trident, though he sometimes holds a fish and is often accompanied by sea creatures.
Occasionally he rides a hippocamp (a hybrid with the foreparts of a horse and the tail of a fish). Popular too in postclassical art, he figures prominently in sea-triumphs with his wife Amphitrite and is a natural subject for fountain-figures, such as on the famous Trevi Fountain at Rome. His marble temple on the promontory of Sounion in Attica, built in the late fifth century BC, is still a landmark for sailors.
Αναρτήθηκε από Unknown