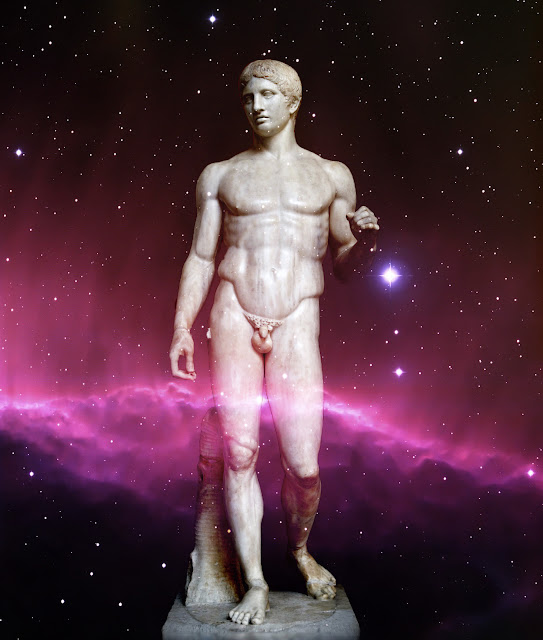 Ancient Greek society was based on a devotion to the highest standards of excellence.This classical ideal of perfection was expressed through body, mind, form and spirit in Greek culture.From athletic prowess, the ancient Greeks sought the perfect body. Perfection of the mind was pursued through religion, philosophy and science.In sculpture and architecture, the perfect form was portrayed.Through comedies and tragedies, they found perfection of spirit.In every aspect of ancient Greek culture,could be found the classical ideal.The religion of the ancient Greeks was polytheistic.This religious system revolved around a pantheon of gods, with the creator god Zeus ruling from the top.Dozens of lesser and greater gods held influence over countless aspects of human life. The gods were believed to watch over families and homes, shepherds and livestock, businesses and trade routes.Gods were responsible for fair and poor weather, famines and disease, storms and earthquakes.With each god having their own specializations, they would be worshipped both collectively and according to the current needs of the worshipper. For example, if beginning a sea voyage, one might sacrifice a lamb to the god Poseidon in exchange for safe passage through his watery domain. Acting as role models of perfection, ancient Greeks would revere the gods associated with their particular trade: soldiers and politicians to Athena; housewives to Hestia; playwrights and actors to Dionysus. These supernatural beings were celebrated through theatre, literature, and sculpture and were in effect the ideal celebrities of the time.

Imitated for centuries afterwards, Greek sculpture is a prime example of the classical ideal. Sculptors took their philosophy to stone by creating perfection through symmetry and natural form in each of their works. The male nude, usually presented in an athletic pose, was the most common subject of this ancient art form. These idealized human images were the embodiment of balance and harmony. The iconic sculptures were made from various materials, including marble, limestone, bronze and chryselephantine (gold and ivory) and could take years to complete. Perfect human specimens were not the artist’s only creation. Statues of the gods were also depicted and would adorn temples to their honor. These larger than life cult statues would be carved examples of perfection of form.Through athletics, it was believed, perfection could be achieved. The ancient Greeks valued physical conditioning as greatly as they did mental exercises, and viewed the two as equally important in a person’s life. Ancient Greeks would compete in various sporting events for individual honor, community respect, and reverence to the gods.From this tradition grew the modern day Olympics, where athletes compete with one another in order to bring victory to their nation, honor to themselves, and strive for the classical ideal of perfection through sport.

Greek architecture from the classical era is another testament to the pursuit of perfection.The Greek column and the arch were the two most fundamental pieces to this method of building design.The Greek column,with its decorative fluting was one part structural support, and one part artistic design.The arch was an architectural tool of simple genius, as it allowed for larger and more elaborate structures to be constructed. It achieved this by dividing the weight above the arch evenly down each side.The arch and column both convey the same sense of symmetry and balance sought by the sculpture, such that they too are seen as works of art. The greatest example of Greek architecture and design is the Parthenon. Many optical illusions are employed to enhance the viewers awe when standing before this mighty structure. The fluted columns were made thickest one third of the way up the column in order to make them appear taller. The fluted columns vary in diameter, with the widest set to the corners to give the building an even grader sense. This colossal temple to Athena the goddess of wisdom still stands to this day, becoming a model to present day architects of the importance of order, symmetry, and proportion: all parts of the classical ideal.

Ancient Greece was the birthplace of modern era democratic society. With its strong emphasis on reason and the individual, Athens tested democracy. Athenian society was divided into “demes”, or small local areas inside the city-state. These demes were then grouped into ten political tribes. Each tribe would select fifty members to a council of five hundred members to serve as the cities government for a little over a month. After their time, a new fifty would be selected from each tribe.Although only men were allowed to participate in the political process, this was still very progressive and a stark contrast from the plutocratic, dictatorial, lineage based systems common in the world. It was the wide acceptance of the classical ideal that allowed this groundbreaking form of self-governance to exist.The classical ideal has been emulated again and again in history and modern time. The concepts of a balanced body and mind are seen in today’s education system. Most of the western world’s governments are based on the models set forth by the idealistic Athenians. Our country’s capitol is adorned with replicas of Athenian monuments and buildings. While Voltaire may have famously proclaimed, “The best is the enemy of the good”, an Athenian man would likely rebut “The best is the embodiment of the good”. It is this pursuit of the better, the best, the ideal that defines the classical ideal.
Αναρτήθηκε από Unknown