The hidden Temple of Venus

The hidden Temple of Venus, a late archaic period temple, lies underneath the center of Thessaloniki from the 6th century B.C., 200 years older than the Parthenon in Athens.
It was originally built to honor the Greek goddess Aphrodite (Venus), the goddess of love, in Aineia and it was later moved during Roman times in the square of the Sacreds in Thessaloniki, where now lies the Antigonidon square, west from the ancient commercial center  Ancient Agora. There it has since remained, an example of the Ionic style of architecture that was a trademark of ancient Greece during the 6th – 5th centuries B.C. However, not all of the ancient temple’s elements and features have been left to oblivion beneath the surface. Some of its architectural features and artifacts can be seen today by visitors to the Archaeological Museum of Thessaloniki, thanks to the efforts of the archeologists and officers of the 6th Department of Prehistoric and Classical Antiquities. You can take a small glimpse in the following photo gallery, but it is highly recommended to visit it.
As the official of the Temple of Venus project report, “the height of the columns reaches seven meters and realistically cannot be exhibited in any exhibit halls of the museum in order to highlight the exact size”. At the moment only one third of the possible artifacts have been excavated from the site and as a result the excavation and the preservation of the rest of the Temple of Venus are of high significance.

According to a study made from the school of Architecture of the Aristotle University of Thessaloniki, Antigonidon square can be reformed in two levels, so that the temple would be rebuilt and be visible in its entirety. 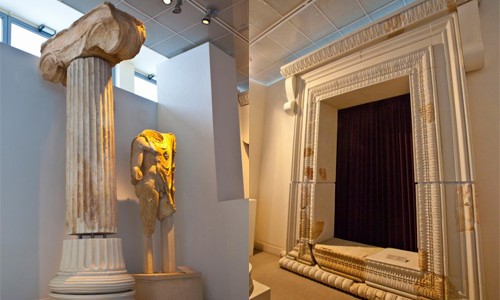 More information about the Temple of Aphrodite (Venus) and the issues surrounding the temple site can be obtained at the Temple of Venus site at http://www.templeofvenus.gr/en.
Αναρτήθηκε από Unknown