Aristarchus of Samos creator of the Heliocentric Theory 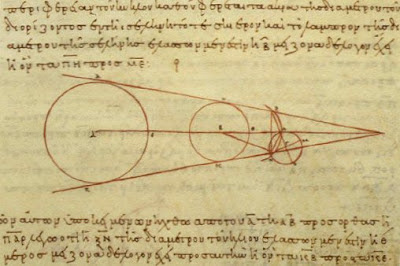 Aristarchus, or more correctly Aristarchos, was a Greek astronomer and mathematician, born on the island of Samos, in Greece. He presented the first known heliocentric model of the solar system, placing the Sun, not the Earth, at the center of the known universe. He was influenced by the Pythagorean Philolaus of Croton, but, in contrast to Philolaus, he identified the "central fire" with the Sun, and put the other planets in their correct order of distance around the Sun. His astronomical ideas were often rejected in favor of the geocentric theories of Aristotle and Ptolemy. The heliocentric theory was successfully revived nearly 1800 years later by Copernicus, after which Johannes Kepler and Isaac Newton gave the theoretical explanation based on laws of physics, namely Kepler's laws for the motion of planets and Newton's laws on gravitational attraction and dynamics.

The only surviving work usually attributed to Aristarchus, On the Sizes and Distances of the Sun and Moon, is based on a geocentric world view. It has historically been read as stating that the angle subtended by the Sun's diameter is 2 degrees, but Archimedes states in The Sand Reckoner that Aristarchus had a value of ½ degree, which is much closer to the actual average value of 32' or 0.53 degrees. The discrepancy may come from a misinterpretation of what unit of measure was meant by a certain Greek term in Aristarchus' text.

Though the original text has been lost, a reference in Archimedes' book The Sand Reckoner (Archimedis Syracusani Arenarius & Dimensio Circuli) describes another work by Aristarchus in which he advanced the heliocentric model as an alternative hypothesis. Archimedes wrote:

Aristarchus thus believed the stars to be very far away, and that in consequence there is no observable parallax, that is, a movement of the stars relative to each other as the Earth moves around the Sun. The stars are much farther away than was generally assumed in ancient times; and since stellar parallax is only detectable with telescopes, his speculation although accurate was unprovable at the time.

The geocentric model was consistent with planetary parallax and was assumed to be the reason why no stellar parallax was observed. Rejection of the heliocentric view was common, as the following passage from Plutarch suggests (On the Apparent Face in the Orb of the Moon):

Cleanthes (a contemporary of Aristarchus and head of the Stoics) thought it was the duty of the Greeks to indict Aristarchus on the charge of impiety for putting in motion the hearth of the universe ... supposing the heaven to remain at rest and the earth to revolve in an oblique circle, while it rotates, at the same time, about its own axis.
—Tassoul, Concise History of Solar and Stellar Physics
The only other astronomer of antiquity who is known by name and who is known to have supported Aristarchus' heliocentric model was Seleucus of Seleucia, a Hellenistic astronomer who lived a century after Aristarchus.

Distance to the Sun (lunar dichotomy)

Aristarchus claimed that at half moon (first or last quarter moon), the angle between Sun and Moon was 87°. Possibly he proposed 87° as a lower bound since gauging the lunar terminator's deviation from linearity to 1° accuracy is beyond the unaided human ocular limit (that limit being about 3° accuracy). Aristarchus is known to have also studied light and vision.

Using correct geometry, but the insufficiently accurate 87° datum, Aristarchus concluded that the Sun was between 18 and 20 times farther away than the Moon. (The true value of this angle is close to 89° 50', and the Sun's distance is actually about 400 times the Moon's.) The implicit false solar parallax of slightly under 3° was used by astronomers up to and including Tycho Brahe, ca. AD 1600. Aristarchus pointed out that the Moon and Sun have nearly equal apparent angular sizes and therefore their diameters must be in proportion to their distances from Earth. He thus concluded that the diameter of the Sun was between 18 and 20 times larger than the diameter of the Moon; which, although wrong, follows logically from his data. It also leads to the conclusion that the Sun's diameter is almost seven times greater than the Earth's; the volume of Aristarchus's Sun would be almost 300 times greater than the Earth. This difference in sizes may have inspired the heliocentric model.

Mentioned by Archimedes and by modern scientists as the first to propose a heliocentric "universe", Aristarchus also proposed an ancient Greek time period, his "Great Year" of 4868 solar years, equalling exactly 270 saroi, each of 18 Callippic years plus 10⅔ degrees.[clarification needed] (Syntaxis, book 4, chapter 2.) Its empirical foundation was the 4267 month eclipse cycle, cited by Ptolemy as source of the "Babylonian" month, which was good to a fraction of a second (1 part in several million). It is found on cuneiform tablets from shortly before 200 BC, though Ptolemy did not attribute its origin to Babylon. (Due to near integral returns in lunar and solar anomaly[clarification needed], eclipses 4267 months apart exceptionally[clarification needed]never deviated by more than an hour from a mean of 126007 days plus 1 hour, the value given by Ptolemy at op. cit. Thus, estimation of the length of the month was ensured to have relative accuracy of 1 part in millions.) Embedded in the Great Year was a length of the month agreeing with the Babylonian value to 1 part in tens of millions, decades before Babylon is known to have used it. There are indications that Babylon's month was exactly that of Aristarchus, which would suggest that one party obtained it from the other or from a common source. Aristarchus's lunar conception[clarification needed] represents an advance of science in several respects. Previous estimates of the length of the month were in error by 114 seconds (Meton, 432 BC) and 22 seconds (Callippus, 330 BC). The attribution of a mean motion to such a motion as the moon's[clarification needed] was possibly new.

The Vatican library has preserved two ancient manuscripts with estimates of the length of the year. The only ancient scientist listed for two different values is Aristarchus. It is now suspected that these are among the earliest surviving examples of continued fraction expressions. The most obvious interpretations can be computed from the manuscript numbers.

Both denominators are can be related to Aristarchus, whose summer solstice was 152 years after Meton's and whose Great Year was 4868 years. The difference between the sidereal and tropical years is identical to precession. The former value is accurate within a few seconds. The latter is erroneous by several minutes.

Both are close to the values later used by Hipparchus and Ptolemy, and the precession indicated is almost precisely 1 degree per century, a value which is too low. 1 degree per century precession was used by all later astronomers until the Arabs. The correct value in Aristarchus's time was about 1.38 degrees per century.
Αναρτήθηκε από Unknown