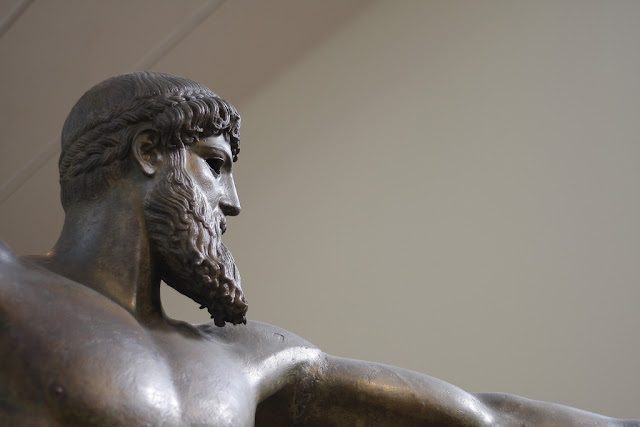 COLOGNE.- Even today, the world of the ancient Greek gods has lost none of its fascination. Accounts of the deeds of mighty Zeus, his jealous wife Hera, the twins Apollo and Artemis, beautiful Aph-rodite, and Dionysos the god of wine, are as enthralling as ever after more than 2000 years.
Greek poets and artists conveyed a vivid picture of the world of these gods. Their work set creative precedents and were a source of inspiration; they also furnished models and a stim-ulus for new interpretations and original compositions by Roman writers and sculptors.
Over a period of more than three hundred years, the Brandenburg-Prussian Electors and Kings in Berlin collected antique works of art, which are now in the museums of the ‘Preußischer Kulturbesitz’ Foundation – the Pergamon Museum and the Collection of Antiquities. For the first time in Cologne, in the exhibition The Return of the Gods, the Olympian world of the Greek gods is recreated with marble statues, stone reliefs, bronzes and luxurious vases from the Berlin collections – a cross section of outstanding European art from early Greek times to the imperial Roman period.

Zeus, Hades, Poseidon – the Father Gods
Zeus, the Romans’ Jupiter, was the majestic ruler of the Olympian world. As the lord of the heavens, he carried a thunderbolt as his weapon. Zeus was the father of nu-merous gods and heroes; most of his offspring were not begotten with his wife Hera, but were the result of his many erotic liaisons.
Poseidon was the master of the sea, inland waters and storms. As the “shaker of the Earth”, who made the Earth tremble with his trident, he was held responsible for earthquakes and natural disasters. People also venerated him as the protector of their ships. The Romans called this god Neptune.
Brother of Zeus and Poseidon was Hades, the Romans’ Pluto. He became the lord of the underworld when the gods drew lots to divide the world between them.
All these “Father Gods” are represented as mature, dignified and mighty. Zeus the father of the gods, Hades the ruler of the underworld and Poseidon the god of the sea, are difficult to tell apart when not depicted with their characteristic attributes

Asclepius, the Healing God
Asclepius was the god of medicine and healing. He was the son of Apollo and a mortal woman, so merely a demigod. He was nevertheless worshipped as a god but not regarded as one of the Olympian gods.
Asclepius’ place was among the people. He is represented in the likeness of a Greek citizen: bearded, wearing a robe and leaning on a staff. A snake is coiled around his staff and the staff (or rod) of Asclepius is still the traditional symbol of medicine.
Asclepius had many sanctuaries that attracted throngs of worshippers, where the sick sought cures through healing sleep (incubation). A centre of his cult developed at Epidaurus and another was located on the island of Kos. The physicians of Kos achieved great fame in the 5th century BC. The best known was Hippocrates and, even today, doctors swear the “Hippocratic Oath”.
The cult of Asclepius reached the western part of the Roman Empire in 293 BC when the Epidaurus sanctuary established a shrine to the Latinised Aesculapius on Rome’s Tiber Island.

Hera and Demeter – the Mothers
Hera, the Romans’ Juno, was the sister and spouse of Zeus. As the queen of the gods she watched over marriage and legitimate offspring. She therefore pursued the amorous escapades of her husband with jealous severity.
Demeter, Ceres for the Romans, was the goddess of the fertile earth, of grain and agriculture. According to the “Homeric” hymn to Demeter, her daughter Kore was abducted by Hades and, as Persephone/Proserpina, became his wife in the under-world. Searching for her daughter, the desperate Demeter neglected her responsibilities as the goddess of agriculture, which led to a severe drought. Only after the return of her daughter for two-thirds of the year did she allow everything to grow and flourish again, but Kore-Persephone had to spend one third of each year with Hades in the underworld, during which time nature was also dead.Demeter and Hera are usually depicted as motherly goddesses, often wearing a dia-dem and veil. When ears of wheat – a specific attribute of Demeter – are not shown, it is scarcely possible to distinguish between the two.

Aphrodite and Hermes
Aphrodite’s sphere of influence was love; her son Eros was the personified god of love. From the 5th century BC onwards, Aphrodite was depicted in ever more reveal-ing clothes: light and flimsy garments accentuated the beauty of the female body. Aphrodite first appeared completely naked in the 4th century BC, as a statue by Praxiteles, whose visualisation of the goddess was widely copied. Venus, the Roman equivalent of Aphrodite, was said to be the mother of Aeneas. Hence she became the mythical ancestress of the family of the Julii, to which both Caesar and Augustus belonged.Hermes was the messenger of the gods, the god of roads, boundaries and herds-men, the patron of thieves. He guided the souls of the dead into the after-world.Hermes wore the clothes of a traveller: a short cape, a broad-brimmed hat and boots or sandals. Speed was suggested by wings attached to his hat, shoes or heels. In addition, he carried a messenger’s staff with two snakes (Kerykeion). The Roman equivalent of Hermes was Mercury, the god of commerce and economic prosperity.

Athena – the Patroness of Great Works
Athena was the wise daughter of Zeus. Before his marriage to Hera, Zeus was the husband of Metis, the goddess of wisdom. Zeus then swallowed his consort when she was pregnant with Athena because it had been prophesied that she would bear him a child stronger than himself, who would ultimately depose him. Athena was born when Hephaestus, the blacksmith god, cleaved open her father’s skull.Athena was the goddess of battle, depicted with a helmet, lance and shield. Another emblem was the “aegis”, a breastplate with the head of the Gorgon Medusa in the centre. Athena was the patroness of the crafts and all artistic activities. She is also said to have invented the flute. While playing it beside a stream, she saw a reflection of herself with her cheeks puffed out, and crossly cast the instrument aside. The satyr Marsyas retrieved the flute and later challenged Apollo to a musical contest.Many cities invoked the protection of Athena, especially Athens, where she was worshipped on the Acropolis. Her Roman equivalent was Minerva.

Apollo and Artemis – divine twins
The twins Apollo and Artemis were the children of Zeus and Leto. Jealous Hera pur-sued her rival relentlessly until, finally, the island of Delos allowed Leto to give birth to her children there.Apollo was the upholder of order in human society, slaying wrongdoers with his bow and sending pestilence as a punishment. He defended religious purity. His attribute was the laurel. He was also the god of oracles and divine prophesies, leader of the muses and a master of the lyre. He was depicted as an idealized youth with long hair.Artemis, the goddess of the hunt and huntsmen, represented unspoiled nature. Known since ancient times as the “Mistress of the Animals” and the “unconquered virgin”, she nurtured and protected young animals, but was also a huntress who killed her prey. Since the late classical period, she has usually been depicted as a young girl in a hunting tunic with a bow and a quiver full of arrows, often accompanied by an animal. Just as her brother was both the god of healing and the god of pestilence, so Artemis was the goddess of childbirth and the bringer of death in childbirth.

The Sanctuary
In the Greek and Roman world, the sanctuary was the most important place for wor-shipping the gods. People would go there with votive offerings and gifts to praise or appease a deity and to ask for favours.
At larger ritual sites there were temples with a cult image of the god. However, the centre of the sanctuary was always the altar where sacrifices were offered. At public ceremonies, cattle were often sacrificed: the priests would burn the bones, fat and hide of the animal as an offering to the gods; the meat would then be consumed by the worshippers at a ritual feast. Individual citizens usually donated smaller animals, fruit or libations. The rites could be accompanied by processions, dancing and music.
An abundance of offerings of various types would accumulate at such sacred sites. Large objects like statues would be set up on display while smaller votive objects, such as miniature figurines or weapons captured from the enemy, were deposited somewhere. In large Greek sanctuaries, Olympia and Delphi for example, there were also treasuries where valuable offerings were stored.

Dionysus and the Theatre
Dionysus was the god of wine and delirious ecstasy. Those who gave themselves to this god had to risk becoming “possessed”. Dionysus was surrounded by a retinue (thiasos) of half-wild hybrid creatures, youthful satyrs, older sileni, and frenzied maenads who often danced to the music of flutes and drums.
Dionysus was depicted as child, as a seductive youth with a body that is sometimes rather feminine, and as an old man leaning on a satyr. His attributes were the ivy, either as a wreath to prevent intoxication or wound around a staff (thyrsos), and a drinking vessel (kantharos). He always symbolised a hedonistic way of life.
Greek theatre originated in the cult of Dionysus. In many places of worship, dramatic performances were part of his festivals. Starting in Athens in the 6th century BC, first tragedies, then “satyr” plays and – after 486 BC – comedies were performed during the Great Dionysia festival. All the roles in the plays, even female roles, were taken by three male actors wearing costumes and masks, accompanied by a choir.

The Pergamon Altar
In the conflicts to succeed Alexander the Great, Philhetairos was able to establish his rule in Asia Minor, at Pergamon. His grandson, Attalos I, took the title of King. The latter’s son, Eumenes II (197-159 BC), defeated the invading Celts and developed the fortress into a Hellenistic city with prestigious marble buildings.The religious centre was the altar of Zeus, which was visible from afar. A flight of steps led up to a podium and the colonnaded area with the altar for burnt offerings. The podium was decorated on all sides by a frieze depicting the battle of the gods against the giants. The rear walls illustrated the history of the founding of Pergamon. Acroteria with figures stood on the roof.
The gigantomachy on the Pergamon Altar marks the pinnacle of Hellenistic art. It is the most complete antique depiction of the struggle of the younger generation of Olympian gods, together with Hercules, against the giants, born out of chaos, who were trying to destroy the new world order. Zeus with his lightning bolts is shown fighting a snake-footed giant, an allusion to the victory over the Celts
Αναρτήθηκε από Unknown