Prometheus The Benefactor Of Mankind 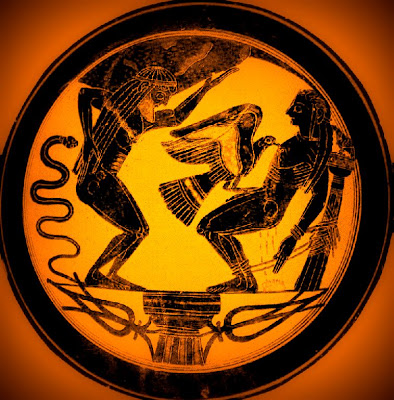 Prometheus was one of the Titans and the benefactor of mankind, whose most important gift to mortals was that of fire. His myth first occurs in Hesiod, where he is the son of the Titan Iapetus and the Oceanid Clymene, and the brother of Epimetheus, Atlas and Menoetius.When gods and men were about to share a meal at Mecone, it was given to Prometheus to serve them by dividing the meat of a great ox into two portions. He produced one portion consisting of the choice meat and entrails, but covered with the ox's stomach so that it looked unappealing, and another of the bones, but covered with rich and appetising fat. He told Zeus to choose which of the two portions would be the gods' share, and Zeus, completely taken in, chose the fat-covered bones. (This set a precedent for the division of the meats in all later sacrifices, where men always took the best part for themselves and burned the bones for the gods.) Zeus was angry at being tricked and punished mankind by withholding from them the gift of fire. But Prometheus stole fire from heaven and carried it secretly down to earth in a fennel stalk (the pith of which burns slowly, thus making a convenient means of carrying fire from one place to another). Then Zeus was once more full of wrath, and this time he punished men by having Hephestus fashion the first woman, Pandora,who was beautiful but deceitful, and would plague the lives of mankind by letting loose sorrows and sickness throughout the world.

She was sent to Prometheus' gullible brother Epimetheus, and he, charmed by this vision of loveliness, took her as his bride.Zeus also punished Prometheus himself: he had him chained to a cliff in the Caucasian Mountains and sent an eagle, offspring of the monsters Typhonand Echidna, to prey on him. Every day the eagle tore out Prometheus' liver, which every night grew whole again so that his torment might continue. Long ages passed before this daily agony ended, when Zeus' son Heracles, on his way to fetch the golden apples of the Hesperides, shot the eagle dead and released the Titan. Zeus allowed this to happen, pleased that this feat increased the fame and honour of his son, and at last relinquished his long anger. Prometheus rewarded Heracles by advising him that he would obtain the golden apples if he sent Atlas to fetch them, while he himself held up the sky. Heracles did as Prometheus suggested and accomplished his difficult Labour successfully.The chaining of Prometheus is dramatised in the tragedy Prometheus Bound, traditionally said to be by Aeschylus, which was the first play in a Prometheus trilogy. Here Zeus is depicted as a brutal tyrant, and Prometheus, son of Themis/Gaia, has done more for mankind than simply bring them fire: he has stopped Zeus from wiping out the human race when he wished to do so, and has taught men many useful skills, including architecture, agriculture,writing, medicine, the domestication of animals, the use of ships, mining for metals, and divination. Chained to his crag by Hephaestus,at the bidding of Cratos and Bia, he is comforted in his misery by a Chorus of Oceanids and by their father Oceanus.He is visited by 10, who has been transformed into a cow by Zeus, and he predicts her future and his own eventual release by her descendant, Heracles, Hermes arrives, demanding to be told a secret that the Titan knows, vital to Zeus' safety, but in vain, and Prometheus continues to cry defiance at Zeus, fearless of his thunderbolts

(1041-53):
Let the twisted fork of lightning fire be flung
against me: let the high air be stirred
with thunderclaps and the convulsive fury
of the winds: let earth to the roots of her foundations
shake before the blasting storm: let it confound
the waves of the sea and the paths of the heavenly stars
in a wild turmoil, and let him raise
my body high and dash it whirling down
to murky Tartarus. He cannot make me die.
At the end of the play Zeus hurls Prometheus down to Tartatus, rock and all.

We know something of the second play, Prometheus Freed, from fragments. Heracles killed the eagle, and Prometheus was reconciled with Zeus and set free in exchange for the secret told him by Themis: that the sea-goddess Thetis was destined to bear a son greater than his father. Zeus, who was at that time wooing Thetis, was thus saved from being overthrown by a mighty son, the very fate that he had inflicted on his own father, Cronus. Thetis was later married off to Peleus, and the fruit of their union was Achilles, a son indeed greater than his father.In later tradition Prometheus was sometimes said to have been not only the benefactor of the human race, but also its creator, fashioning it from clay. But mankind originated from him in another sense, for his son Deucalion married Pyrrha, the daughter of Epimetheus and Pandora, and when Zeus sent the Great Flood over the earth, Deucalion and Pyrrha were the sole survivors. On Prometheus' advice they built an ark, stocked it with food, and lived safely on it until the rain ceased. As the only mortals left alive, it was then their task to repopulate an empty world. On Zeus' instructions,brought to them by Hermes, they picked up stones from the earth and threw them over their shoulders. Deucalion's stones were transformed into men, and Pyrrha's into women. Thus, in one way or another, the human race owes its existence to Prometheus.

The Titan also plays a part in other myths. He instead of Hephaestus was occasionally said to have been the 'midwife' who split Zeus' head with an axe so that he might give birth to Athena. He was also said to have released the Centaur Cheiron from endless suffering when he was wounded by one of Heracles' arrows. The immortal Centaur, in agony, longed in vain to die, so Prometheus offered himself to Zeus to be made immortal in Cheiron's place, and the Centaur gratefully died. This story implausibly ignores the fact that Prometheus, being a Titan, was already immortal. Prometheus attacked by the eagle, with Heracles rescuing him, occurs in ancient art as early as the seventh century BC, and it was he subject of one of the panels painted by Panaenus around Pheidias' great statue of Zeus at Olympus. Prometheus was worshipped in several places in the ancient world, including Athens where his cult was celebrated by a torch race, commemorating his gift of fire to man.
Αναρτήθηκε από Unknown