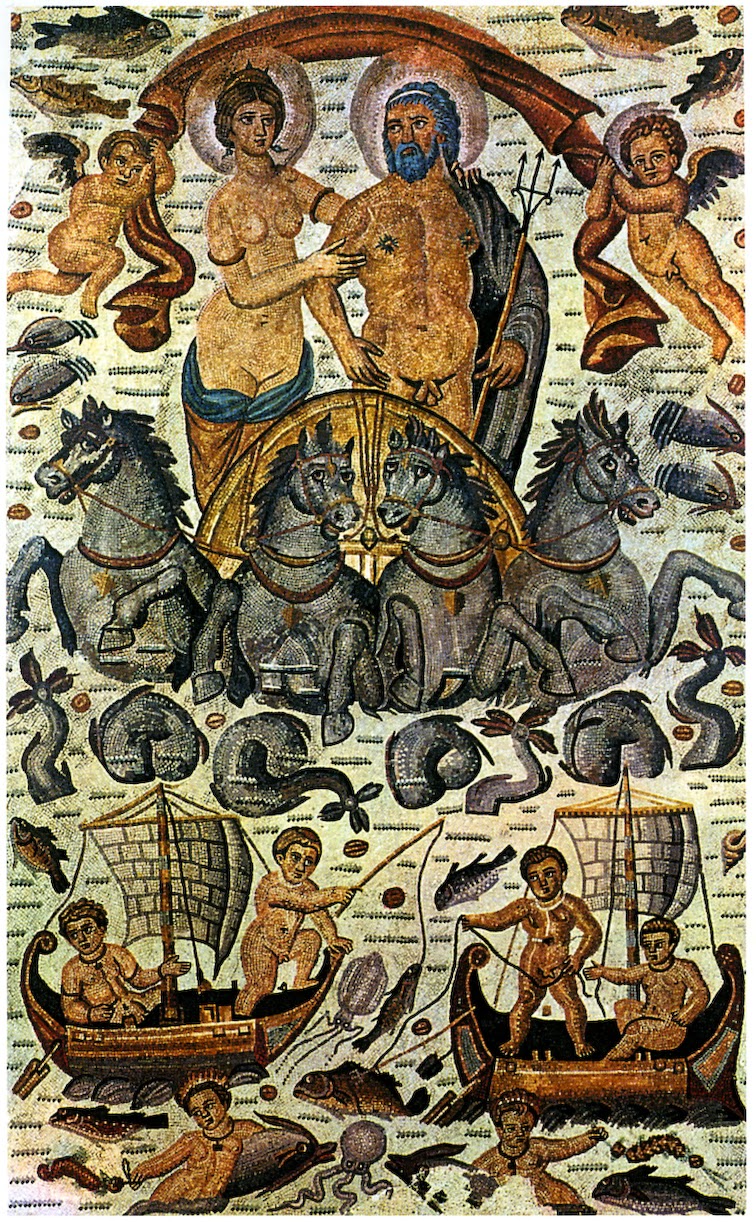 One of the most important excavations' locations of recent years, under the responsibility of the inspector of antiquities Mr Adamantios Sampson, is the island of Gioura in the Sporades Islands' complex. The findings from the Cyclops' Cave enlighten impressively our knowledge of the period of the remote Hellenic prehistory, the Mesolithic era.It has been proved that, at least 10,000 years ago, people who lived in the Sporades complex used very advanced techniques of fishing and shipping, they hunted or kept goats and they had most probably acquired a very productive expertise in fishing.The Mesolithic era is considered the transitional stage between the long Palaeolithic period during which man was simply a food gatherer and the Neolithic period during which man tamed plants and animals and was transformed to a farmer or animal breeder and established permanent settlements.As the late professor of Prehistoric Archaeology Dimitirs Theocharis brilliantly pointed out, the term Mesolithic "is becoming only for the developments in Western Europe" while he considered that "as to the Neolithic revolution in Greece it does not seem possible for it to have been transferred to a deserted country".

When the above were written by D Theocharis in 1976, the only findings known were those of Frachthi in Ermionida in the Peloponnese, which have been dated between 7500 and 6500 BC and even before that time. The findings include:Fish bones which prove that there was fishing activity. Pieces of obsidian, a hard glassy volcanic rock from the island of Milos, which indicated the possible existence of shipping as well as mining technology.Mr Charis Tzalas, chairman of the Hellenic Institute for the Protection of Maritime Tradition, organised an experiment of maritime archaeology, inspired by the findings of the American Professor T. Jacobsen from the area of Frachthi:They made a boat exclusively from papyrus, an aquatic plant which can be found near water areas of Greece ( as well as on the river Nile in Egypt). A similar boat was used until recently in Kerkyra (photo on the left). The "papyrela" could easily travel from Lavrion to Milos. Its crew would use kayak oars for navigation.It has also been proven that men in the Greek prehistoric period could travel by sea using natural material offered by the domestic world of Greece and also using simple techniques such as the one of straw mats.

The greatest problem for the study not only of the prehistoric period but also of more recent civilization periods, is the coastal formation of the country, which has changed dramatically. Apart from the rise of sea levels, there have also been destructive earthquakes, volcanic explosions and the sinking of large pieces of land. As a result, most of the evidence for prehistoric civilization stages in the Aegean area can now only be found in the sea and actually in great depths.Bearing that in mind, the excavations' finds we have today from Adamantios Sampson on the island of Gioura are very important, not only because they confirm but because they also complete the findings of the area of Frachthi.Adamantios Sampson is famous for his research on the prehistory of the Dodecannese (excavations on the island of Gyali in Nisyros - a source of "obsidian"; study titled "The Neolithic Period in the Dodecannese"), of Evoia (Cave of Skoteini Tharounia), the very important excavation in Manika of Chalkida, the prehistoric research in caves of Achaia and Kopaida e.t.c. Today he is the supervisor of the Inspectorate for Prehistoric and Classical Antiquities of the Cyclades.

The excavation in the Cyclops' Cave started in 1992. It is a very demanding search since Gioura is a deserted island and the excavation team is obliged to live under severe conditions for lengthy periods of time.
The archaeological analysis for clay and the relevant dating have been under the responsibility of the "Demokritos" Centre in Athens and the University of Edinburgh.The lowest archaeological level is one of more particular interest. This is where they found plenty of fish-hooks made from bone, stone and bone tools, jewellery, bone awls, tenths of thousands of snails, shells from shell fish, fish, birds and goats' bones, fire places as well as , this year, a human skull.Mr Sampson dates these findings from at least the 8th millennium BC . He concludes that the habitation of the Cyclops' Cave was occasional according to the needs of fishermen. For this reason:Today's sea depth in the area show that Gioura was an island dating back to 10,000 BC. Research on the surface of the island and all the relevant information show that Gioura never had permanent residents.It is also estimated that fishermen who used the cave as a shelter were professionals (for today's standards).

Let us now turn to the proof and indications provided by these modest but substantially important findings. The 60 bone fish-hooks make part of a great collection starting from sizes of 8 millimetres and up to 6 centimetres long. The fish are tenths of thousands in variety, as this is proved by their remnants and a lot of them are heavy in weight (garfish, tuna). Evidence on fish is by far richer in the area of Frachthi. The relevant research on such evidence and the remnants of a seal is being carried out by the Australian expert, Judy Powel.Also, remnants of fish hooks and large fish of several kinds prove that the inhabitants of the Aegean had developed fishing and shipping techniques which were extremely progressive for their times. The advance level of these techniques is further proved by the mere fact that the technology for fish-hooks of various sizes as these were found in Gioura, is not much different from the contemporary one.
The existence of fish of big sizes is also proof that the Mesolithic (and therefore also the Palaeolithic) fishermen of the Sporades had very advanced shipping techniques, especially for maritime engineering and navigation. Without these they wouldn't have been able to fish what was found in Gioura, since the conditions for shipping (winds, rough seas e.t.c.) in the Aegean are quite particular and difficult.

Another piece of evidence for the advanced level of fishermen in the Sporades at least 10,000 years ago, is the mere fact that the Indians who live in the coast of British Columbia in Canada only reached the same level of civilization in this respect at the beginning of the present century.Another important finding on the island of Gioura is goats bones. Until today, the prevailing view (at least, in foreign bibliography) was that goats were brought to Greece by populations which migrated from the East, through Asia Minor, and who were carriers of advanced civilization levels of the Neolithic period which is characterised by development in the areas of farming and animal breeding. This view is based on the hypothesis that goats ( as well as wheat) originated in the Near East Asia.The goats' bones from the Cyclops Cave can be- with some reservation- dated back to the 8th millennium BC and prove that goats existed long before the Neolithic period in Greece. Their taming might have been achieved at the same time as in other areas or was probably the result of a simple transfer of knowledge because of the sea-travelling which had been developed in the Aegean.

Another significant possibility is that the fishermen of Gioura had probably acquired a productive specialisation in fishing. The huge quantities of fish which was found in the Cyclops' Cave, suggests that they used the area for the possible processing and storing of fish. Given that during the same period we have proof for the transportation of obsidian from Milos to Frachthi, it is quite safe to assume that the Sporades' fishermen of 10,000 years ago had developed a particular form of exchange commerce.This fishing specialisation is also observed, in proportion, in one city of the historic period. Kyzikos, was established in the Asian coast of Bosporus in 756 BC from Ionian settlers and owed its wealth to the fishing of tuna. Actually, from 550 BC, the emblem of Kyzikos was the symbol of a tuna fish as this is shown in the amber coins of the city.The Gioura fishermen seem to have been transited to the next civilization stage of the Neolithic period quite easily. Following the Mesolithic level is the archaeological level of the ancient Neolithic period (6500 - 5800 BC).

The next Neolithic level is characterised by the Article of ceramics with a particularly impressive decoration, which seems to have been copied from woven or embroidered textiles. The same ceramics were found in the neighbouring island of Kyra Panagias. The inspector Ad. Sampson assumes that this is a local Sporades production since no similar ceramics can be traced in Thessalia or Continental Greece.The findings in the Cyclops' Cave also show that professor D. Theocharis was right to suggest 20 years ago that "as to the neolithic revolution in Greece it does not seem possible for it to have been transferred to a deserted country".
Αναρτήθηκε από Unknown