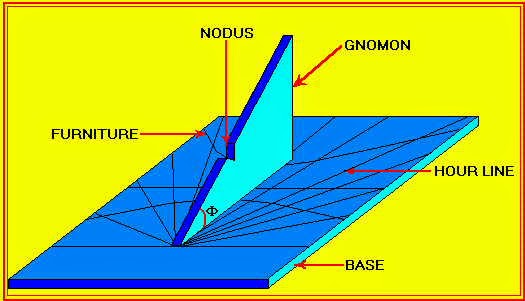 The Greek language and the Greek civilization dominated in the geographical region of modern Greece and in other regions near by the Mediterranean Sea. In these geographical regions the sun shines during the most days of the year.Thus, the sundials were very useful instruments for the measurement of time. Ancient Greek astronomers invented and constructed a variety of astronomical instruments for the measurement of time; among them we find sundials of different types. Nowadays, in Athens, there are seven ancient sundials of marble construction, which type differs due to the different shape of their dials’ surface.

They are kept in the National Archaeological Museum of Athens. The one of them is located in the Museum’s yard and the other six in the Prehistoric and Classical Antiquities Collection of the Museum. Another sundial is located in the cliff of the Acropolis.Astronomers and mathematicians of the Classical and the Hellenistic period contributed to the foundations of the science of astronomy by tracking the movements of the celestial bodies and devising methods to project their orbits on the Earth’s surface.From their works, or from references to them made by subsequent authors, it is possible to obtain information concerning observations of the stars, astronomical notions, the solutions of astronomical problems and also about the construction of astronomical instruments.Some of the most eminent ancient Greek astronomers and philosophers who observed the stars invented and constructed astronomical instruments and attempted to measure time with them were:

-Thales of Miletus (624-546 BC) predicted the solar eclipse of May 28, 585 BC also used a geometrical method to measure the height of the pyramids based on their shadow
-Anaximander of Miletos (610-540 BC) was the first to create a gnomon
-Aristarchus (310-250 BC) of Samos supported the view of the heliocentric system

-Eudoxus of Knidos (409-356 BC) had also created astrolabus and dioptra, by which he was capable to make astronomical observations

-Apollonius of Perga (261-190/179 BC)developed the theory of epicycle in order to calculate the orbits of the planets, a theory also used by Hipparchus (2nd century BC). It should be mentioned that Hipparchus was the first astronomer who created a full star catalog, by recording 850 stars, from which 350 were already mentioned by Aratus

Moreover, Heron of Alexandria (1st century BC–1st century AD) constructed a dioptra to measure the distance between stars and the Earth

Finally, one of the most significant astronomers of the antiquity was Claudius Ptolemy (2nd century AD) whose work, and especially Syntaxis Mathematica (Almageste), had a major impact in Astronomy.
Moreover Vitruvius in his list mentions some additional names of ancient inventors and constructors of sundials, who flourished from the 6th to the 3rd century BC.The sundials constructed by them had a grid of hour lines and curves, by which they could determine the hour of the day, the solstices and the equinoxes.The contribution of those who tackled problems of conic sections to the construction of conical sundials was essential. For example, Apollonius of Perga, one of the most significant astronomers of the Alexandrine school, is considered the prime investigator of conic sections due to his treatise Conics. According to Eutocius (6th century, a well-known commentator of the works by Archimedes), the mathematician and geographer Dionysodorus of Caunus(circa 250-190 BC), was known for his solution of the problem of dividing the sphere into parts of given proportions a solution which included conic sections. According to S. Gibbs the oldest conical sundial (the one with no. 3049 G) is dated in the ends of the 3rd century BC which is when Dionysodorus lived. Therefore it seems that the solution of the problem of the construction of a conical sundial became possible in about that time period.

The sundial consists of two parts: the surface of the dial (in which are carved the hour lines and the curves of summer solstice, winter solstice and equinoxes) and the  gnomon, which is inclined from the plane of the horizon at an angle equal to the geographical latitude of the region.Its function is the following: The rays of the sun create a shadow in the surface of the dial due to the existence of the gnomon. In this way,the trajectory of the sun in the sky is s hown in the surface of the dial, through the movement of the shadow.There are many types of sundials, such as the conical, flat, spherical type, which consist of many subtypes. The type of each sundial is mainly defined from the shape of the surface of the dial. Many sundials were constructed for
time measurements for specific geographical regions and others for adornment in ancient buildings.The sundials were widely used in Greek antiquity for the measurement of time during the sunny days of the
calendar year and for the determination of the seasons.

The ancient sundials of Athens


The sundials of Athens date from the Hellenistic, the Roman period and the period of late antiquity.In the
National Archaeological Museum of Athens there are seven sundials of marble construction. The six of them are parts of the Prehistoric and Classical Antiquities Collection of the Museum and the other one, which is heavier, is located in the Museum’s yard. The index numbers of the sundials are No 3156, 3157, 3158, 3159, 3220, 13365 and 13366. The sundials with index numbers 3156, 3157, 3158 and 3159 were recovered from the ancient Dionysus Theater, which is located under the southern cliff of the Acropolis; the place where the other sundials with index numbers 3220, 13365 and 13366 were discovered is unknown. Another sundial alike to those of the Museum is located in the cliff of in the ancient rock of the Acropolis.
Elaborately study of the characteristic parameters of these sundials (apart from the Acropolis’ one), such as the angle formed between the cone’s axis and the generatrix, the geographical latitude of operation and the original gnomon’s length, has been made.

The sundial with index number 3156 is of conical type with a gnomon; the sundials with index numbers
3157 and 3158 are of conical type without a gnomon; these with index numbers 3220 and 3159 are cylindrical sundials; this with index number 13365 is a flat sundial and that with index catalog 13366 is a semi-spherical one.Most of them are preserved in rather good condition.One of them has a gnomon (index No. 3158) and another one (index No.13366) has many cracks and damages. In all dials’ surfaces there are carved hour lines and in some of them are discernible the curves (the summer solstice curve; the winter solstice curve and the curve of equinoxes).The sundials of Athens are considered as very important archaeological and scientific findings with a major contribution in the science of Astronomy.Most of them are preserved in rather good condition and function rather accurately for their geographical latitude of operation that they were made for. Their geographical latitudes correspond to these of the regions of the ancient Greek world.This evidence shows that sundial makers in Antiquity Greek not only were good sculptors but also had made detailed astronomical observations.
Αναρτήθηκε από Unknown