Ionia the most important centre of the Greek world 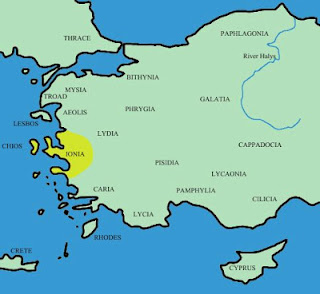 Ionia is the name given during ancient times to the central sector of Anatolia’s Aegean shore in Asia Minor, present-day Turkey, one of the most important centres of the Greek world. It was colonized by Greeks from the Athens region around 1000 BCE. Here the Greeks founded a dozen mini-states, two of them on the offshore islands of Chios and Samos, the rest of them stretching along the strip of mountainous coast land.

During the 8th century BCE some important changes took place in the eastern shore of the Mediterranean. Assyria gained a renewal of strength like never before and the Phoenician city-states were conquered. The Phoenician sea-trade withered and the Greek city-states took advantage of the Phoenician subjection to Assyria and became the leading sea-traders and navigators. Although some Phoenician colonies in the west remained independent, the only serious competition the Greeks came across was from the expanding power of Carthage. Most cities of Ionia had an important commercial life and lay for the most part at the mouths of rivers, or at the ends of roads, that carried the goods of the hinterland down to the Mediterranean for shipment elsewhere. During the 7th and 6th century BCE, Ionian cities experienced important political and economic changes as political power, which used to be in the hands of the landowning aristocracy, gradually moved to the merchant class.

Ionian merchants established colonies as trading posts in Egypt, Italy and along the Black Sea. Miletus alone, the southernmost Ionian city, had eighty colonies and became the richest city of the Greek world. The wealth and luxury of the city was proverbial throughout Greece. Milesian merchants had such levels of profits that they lent money to a number of enterprises far and wide and even to the municipality itself. This city was the main focus of the “Ionian awakening”, a name for the initial phase of classical Greek civilization.

The kingdom of Lydia lay to the east of the Ionian coast city-states and remained on peaceful terms with the Greeks, with very tight cultural and commercial relations. Lydia’s capital, Sardis, was a centre for the traffic of goods and ideas between Mesopotamia and the Greek Ionian settlements. After all, the crossroads of trade are ideal meeting points for the exchange of ideas, beliefs, customs, knowledge and new insights. About 600 BCE, Ionian cities were the intellectual leaders of Greece. The revolutionary idea of replacing supernatural explanation with the concept of a universe that is governed by laws of nature began here.

In Miletus the population was freed from the bondage of tradition by long absences from their native altars and homes. Priesthood had no significant power, men’s thinking was not limited by an ancient inspired book claiming truth or divine revelation and even Homeric poems had hardly taken any definite form yet. Milesians were used to travelling to distant regions and received the input of the civilizations of Lydia, Babylon Phoenicia and Egypt. Mathematical knowledge, foreign commerce and geography, astronomy, navigational techniques, all these notions helped to enrich Miletus. Meanwhile, wealth had created leisure and freedom of thought was widely accepted. All these factors can help to understand how a number of Ionian minds developed the idea that the world could be understood in terms of physical phenomena, without reference to myths or superstitions.

Thales of Miletus is credited with being the first of these revolutionary minds. He came up with an hypothesis of the fundamental structure of the universe by claiming that water is the original substance. He is famous for his astronomical knowledge which allowed him to predict a total eclipse of the sun and also for his knowledge on geometry, which he brought from his visit in Egypt. Anaximander, Anaximenes and Pythagoras are just a few examples of these talented Ionian minds. This new rational insight in many cases led to conclusions surprisingly similar to what our more sophisticated methods have led us to believe today. In Ionia we find the roots of the Western scientific tradition.

Around 612 BCE things started to change. The Assyrian empire came to an end as a result of the destruction of Nineveh, its capital, the greatest city in the world at that time. An allied army of Persians, Medes, rebelling Chaldeans and Babylonians besieged and sacked the centre of Assyrian power. This left Babylon as the imperial centre of Mesopotamia and Lydia was now free to turn its attention to the West. The Ionian cities were now dominated by Lydia, but Lydian rulers admired the Greeks and treated the Ionian cities leniently. Croesus, the last Lydian king, even paid for the construction of the temple of Artemis, which became one of the Seven Wonders of the ancient world. In 546 BCE, the Persian king Cyrus II defeated Croesus and Lydia, along with the Ionian cities, became part of Persia.

Using the sea as a highway, which is much cheaper, faster and more efficient than transport by land, the Greeks expanded and developed in a such a way that conflict with a major power became inevitable. The Greco-Italian-Sicilian trading route that the Greeks controlled competed more and more with the Oriental Indo-Persian-Phoenician and commercial rivalry set the stage for war.

About 500 BCE, the Ionian cities under Persian control dismissed the Persian authorities and declared their independence, triggering the Ionian revolt with Miletus as the leading state, the first of the many military conflicts between Greeks and Persians. Athens sent a fleet of twenty ships to support the revolt. Each Ionian rebel state raised its own troops, but kept them under separate command. The army of Miletus marched upon Sardis and burned it to the ground. Finally, the Ionian cities organized a united fleet and in 494 BCE the Persian navy met the Ionian at Lade, in one of the most important sea battles of history. However, the navy of Samos had a secret arrangement with the Persians and around half of the hundred Samian ships sailed away just before battle with many other contingents following their disloyal example. The Ionian defeat was complete and Ionian civilization never managed to fully recover from this disaster. The Persians captured Miletus, all the males were killed, the women and children enslaved and from that day the city became a minor town. Persian control was re-established throughout Ionia. After the decisive Greek victory at the Battle of Salamis (480 BCE), the Ionian cities regained their independence and helped to form the Delian League with Athens.

Around 334 BCE, Alexander the Great marched down into Ionia, offering the Greek cities democratic self-government under his protectorate. Most cities opened their gates without resistance and enjoyed a new era of prosperity during the Hellenistic period but none of them restored their previous splendour.  Miletus refused Alexander’s offer and was finally levelled after a long siege and was never restored to its previous status of a leading city. The region then became part of the Seleucid, and later of the Attalid, kingdom. About 130 BCE Ionia came under Roman control and became part of the Roman province of Asia. During the Roman period the main cities of Ionia experienced a revival of prosperity, and many of the impressive ruins at their sites date from that time. Ephesus, Miletus, Smyrna, and Chios were among the most splendid cities of the Roman world and continued to flourish in Byzantine times.
Αναρτήθηκε από Unknown