The Divine Birth of the Dying and Resurrected God Dionysus 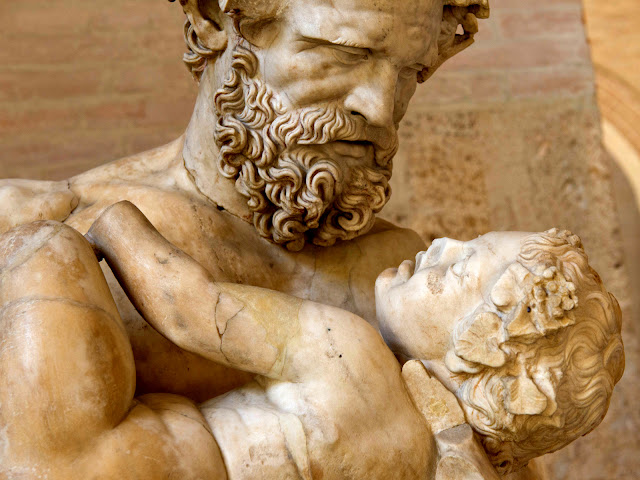 Dionysus is a dying and resurrected god of fertility.In his genesis myths has two, or even three, successive incarnations, firstly between Zeus and Persephone representing heaven and the underworld reincarnated as the divine son of a mortal mother Semele by god the father Zeus, finally returning to the underworld like Orpheus, but to retrieve his mother. The first is the Orphic tradition of Dionysos-Zagreus and the second of
Demeter came from Crete to Sicily, where, near the springs of Kayane, she discovered a cave. There she hid her daughter Persephone, and set as guardians over her, two serpents that at other times were harnessed to her chariot. In the cave the maiden worked in wool - the customary occupation for maidens under the protection of Pallas Athene, in her sacred citadel at Athens. Persephone began weaving a great web, a robe for her father or her mother, which was a picture of the whole world. While she was engaged in this work Zeus came to her in the shape of a serpent, and he begat by his daughter that god, Zagreus or Dionysos who, in the Orphic stories, was to be his successor, the fifth ruler of the world.

The birth of the son and successor to the throne actually took place in the maternal cave. A late ivory relief shows the bed in the cave: the bed in which the horned child - the horns signify attributes of the heavenly bull, the waxing and waning (lunar) son of Persephone, the moon-goddess of the underworld - had just been born. He is also crowned with serpents. . The Orphic story also named the toys of the new ruler of the world: toys that became symbols of those rites of initiation which were first undergone by the divine boy, the first Dionysos: dice, ball, top, golden apples, bull-roarer and wool. The last two played a part in the ceremony of initiation.It was told that the [Titans] surprised the child-god as he was playing with the toys. Jealous Hera had instigated them to this.The Titans had whitened their faces with chalk. They came like spirits of the dead from the Underworld, to which Zeus had banished them. They attacked the playing boy, tore him into seven pieces and threw these into a cauldron standing on a tripod. In his flight from attack he had fled and like Dumuzzi transformed himself into Zeus, Chronos, a young man, a lion, a horse a serpent and finally a bull, the form in which he was torn apart. A pomegranate tree sprouted from his fallen blood. When the flesh was boiled, they began roasting it over the fire on seven spits. . When Zeus smote the Titans with his lightning they had already eaten the flesh of Dionysos. They must have been hurled back into the Underworld, since. they are invoked as the subterranean ancestors of mankind. . The boiled limbs of the god were burnt - with the exception of a single limb, or sometimes the heart . A pomegranate is said to have sprung from the blood like the anenomes of Adonis.

A goddess was present at the meal - in later tales, the goddess Pallas Athene - and she hid the remaining undamaged limb, or heart, in a covered basket. Zeus took charge of it. It was said to have been Dionysos's heart. This statement contains a pun: for it was also said that Zeus entrusted the kradiaios (heart or 'fig') of Dionysos to great mother Rhea [Hipta], so that she might carry it on her head. On her head was a liknon: a winnowing-fan, such as was carried on the head at festal processions, and contained a phallus hidden under a pile of fruit - Dionysos himself having made the phallus of fig-wood.

In the myth of the second Dionysus the god Zeus came to the mortal Semele, the daughter of Cadmus, King of Thebes, with a potion from the heart of Dionysos, and this he gave Semele to drink, making her pregnant. When Hera heard of this, she tried to prevent the birth. She disguised herself as Semele's nurse, . . . when Zeus first came to Semele he had assumed a mortal guise. Led astray by her pretended nurse, Semele asked Zeus to grant her just one wish. Zeus promised to do so, and when his beloved wished that he would appear to her as he did to Hera, he visited her with lightning The lightning struck her and she descended into the Underworld consumed in the holocaust of the lightning of her heavenly bridegroom.
Cooling ivy tendrils protected him from the heat by which his mother was consumed. Zeus rescued from her body the unripe fruit of her womb, the child Dionysos and sheltered the prematurely born god in his own thigh by sewing the child into his divine body. And when the proper time for his birth had come, he brought his son into the light and bore him, far away to the east, on Mount Nysa. Zeus then . entrusted Dionysos to the divine nurses who were to look after him in the cave. When they had reared him to full stature, he went into the woods wreathed with ivy and laurel, but not yet with vine-leaves. He was accompanied Satyrs and by women, the nymphs of the woods, the Maenads armed with ivy-clad staffs tipped with pine cones, swords, shakes and bull-roarers. Satyrs, addicted to wine revelry and lust, are often depicted naked and sexually aroused. They would pursue the Maenads but were happy to consummate their desire with any creature or with inanimate objects.

Thus, the "twice-born one" has already, before his entry into the world, outgrown everything that is mortal. He has become a god, the god of intoxicated delight. A god supposedly inflicted with madness by Hera for Zeus's indiscretion. Thus the, the bringer of joy was predestined for suffering and death - the suffering and death of a god! And to the house of his mother blessedness and suffering.Later Dionysos descends to the Underworld in search of Semele. As a price for his service he had to promise complete female surrender. Only if he did this could he reach his mother and bring her back. He fulfilled his promise with the help of a phallus made of fig-wood, which he erected on the spot. . . . When Dionysos had brought Semele back and had made her immortal, he named her Thyone, "The ecstatically raging" and took up to Heaven.That the name Semele, which supposedly originally referred to a goddess, was actually a human name is indicated by the second name which the mother of Dionysus bears, the new mother freed from the realm of death by her son and crowned with immortality. Dionysus is said to possess nine choirs among the Heavenly Host
Αναρτήθηκε από Unknown