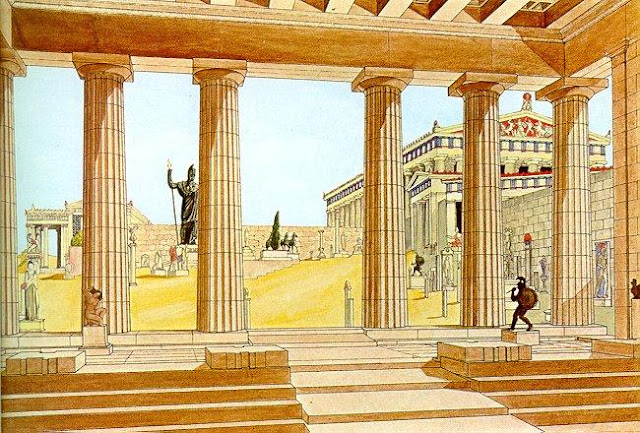 Ancient Greek architects strove for the precision and excellence of workmanship that are the hallmarks of Greek art in general. The formulas they invented as early as the sixth century B.C. have influenced the architecture of the past two millennia. The two principal orders in Archaic and Classical Greek architecture are the Doric and the Ionic. In the first, the Doric order, the columns are fluted and have no base. The capitals are composed of two parts consisting of a flat slab, the abacus, and a cushion-like slab known as the echinus. On the capital rests the entablature, which is made up of three parts: the architrave, the frieze, and the cornice. The architrave is typically undecorated except for a narrow band to which are attached pegs, known as guttae. On the frieze are alternating series of triglyphs (three bars) and metopes, stone slabs frequently decorated with relief sculpture. The pediment, the triangular space enclosed by the gables at either end of the building, was often adorned with sculpture, early on in relief and later in the round. Among the best-preserved examples of Archaic Doric architecture are the temple of Apollo at Corinth, built in the second quarter of the sixth century B.C., and the temple of Aphaia at Aegina, built around 500–480 B.C. To the latter belong at least three different groups of pedimental sculpture exemplary of stylistic development between the end of the sixth century and beginning of the fifth century B.C. in Attica.


Every piece of a Greek building is integral to its overall structure; a fragment of molding often can be used to reconstruct an entire building.In the Ionic order of architecture, bases support the columns, which have more vertical flutes than those of the Doric order. Ionic capitals have two volutes that rest atop a band of palm-leaf ornaments. The abacus is narrow and the entablature, unlike that of the Doric order, usually consists of three simple horizontal bands. The most important feature of the Ionic order is the frieze, which is usually carved with relief sculpture arranged in a continuous pattern around the building.

In general, the Doric order occurs more frequently on the Greek mainland and at sites on the Italian peninsula, where there were many Greek colonies. The Ionic order was more popular among Greeks in Asia Minor and in the Greek islands. A third order of Greek architecture, known as the Corinthian, first developed in the late Classical period, but was more common in the Hellenistic and Roman periods. Corinthian capitals have a bell-shaped echinus decorated with acanthus leaves, spirals, and palmettes. There is also a pair of small volutes at each corner; thus, the capital provides the same view from all sides.

The architectural order governed not only the column, but also the relationships among all the components of architecture. As a result, every piece of a Greek building is integral to its overall structure; a fragment of molding often can be used to reconstruct an entire building. Although the ancient Greeks erected buildings of many types, the Greek temple best exemplifies the aims and methods of Greek architecture. The temple typically incorporated an oblong plan, and one or more rows of columns surrounding all four sides. The vertical structure of the temple conformed to an order, a fixed arrangement of forms unified by principles of symmetry and harmony. There was usually a pronaos (front porch) and an opisthodomos (back porch). The upper elements of the temple were usually made of mudbrick and timber, and the platform of the building was of cut masonry. Columns were carved of local stone, usually limestone or tufa; in much earlier temples, columns would have been made of wood. Marble was used in many temples, such as the Parthenon in Athens, which is decorated with Pentelic marble and marble from the Cycladic island of Paros. The interior of the Greek temple characteristically consisted of a cella, the inner shrine in which stood the cult statue, and sometimes one or two antechambers, in which were stored the treasury with votive offerings.

The quarrying and transport of marble and limestone were costly and labor-intensive, and often constituted the primary cost of erecting a temple. For example, the wealth Athens accumulated after the Persian Wars enabled Perikles to embark on his extensive building program, which included the Parthenon (447–432 B.C.) and other monuments on the Athenian Akropolis. Typically, a Greek civic or religious body engaged the architect, who participated in every aspect of construction. He usually chose the stone, oversaw its extraction, and supervised the craftsmen who roughly shaped each piece in the quarry. At the building site, expert carvers gave the blocks their final form, and workmen hoisted each one into place. The tight fit of the stones was enough to hold them in place without the use of mortar; metal clamps embedded in the stone reinforced the structure against earthquakes. A variety of skilled labor collaborated in the raising of a temple. Workmen were hired to construct the wooden scaffolding needed for hoisting stone blocks and sculpture, and to make the ceramic tiles for the roofs. Metalworkers were employed to make the metal fittings used for reinforcing the stone blocks and to fashion the necessary bronze accoutrements for sculpted scenes on the frieze, metopes and pediments. Sculptors from the Greek mainland and abroad carved freestanding and relief sculpture for the eaves of the temple building. Painters were engaged to decorate sculptural and architectural elements with painted details.