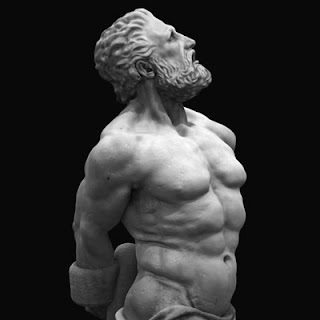 After the world was created and the gods had fought their wars, the land that lay below Mount Olympus remained unpopulated, even though Gaia, the first goddess, had long yearned to make creatures to inhabit the earth. Finally, Zeus decided it was time.It was a good time to be created. No monsters roamed the earth, and the world was at peace. Zeus began to make creatures to populate this beautiful world. However, just as he was beginning, he was called away to settle a matter dividing his fellow Olympians. He decided to appoint Prometheus and Epimetheus, sons of Titans who had fought with the Olympians, to continue the project of creating earth’s first inhabitants.Although the brothers were Titans by birth, they had sided with the Olympians in the war against Cronus and the other Titans because, blessed with the gift of being able to see the future, Prometheus had foreseen the Olympian victory. Prometheus was the more sensible of the two brothers, and he always planned ahead. Epimetheus, on the other hand, always meant well, but he never planned ahead. Epimetheus never thought about the consequences of his actions until after he had completed them.

Zeus had chosen these brothers for the project of creating the first people and animals on earth because
Prometheus was an excellent potter and sculptor.Prometheus could make just about anything, and he had a
good imagination. Epimetheus was invited to work on the project because he was always eager to help his brother.Because Zeus had only just started to make the various earth creatures, the brothers had a lot of work ahead of them. After using clay to sculpt the new creatures into their basic shapes, Prometheus went to Athena, the goddess of wisdom, for advice on how to complete the work.Epimetheus stayed behind to give the unfinished creations their final distinguishing features.Athena’s advice was simple. She told Prometheus that since the creatures were already composed of earth and water, having been fashioned from clay, the only element lacking for life was air. So, Athena advised Prometheus to hold each of the newly shaped creatures up to the sky. When the wind blew into them, she promised, they would breathe and be truly alive. Meanwhile, Epimetheus continued to work. He enjoyed showing off his creative powers and granted a wide variety of interesting physical attributes to all the different creatures. Epimetheus gave some of them fur and
hair, which would protect them from the elements. He gave others teeth and claws so that they could easily
collect and eat food. In addition, he gave some of the creatures strength and speed.

When Prometheus returned from his talk with Athena, he found that once again, his brother had acted before
thinking. Epimetheus had been so excited about designing the new animals and so generous with his creative powers that he had completely forgotten to save any special gifts for the human beings. By the time the sculptor had gotten around to the humans, he had run out of ideas. They were left weak and defenseless,and they would have remained so forever if Prometheus had not stepped in.Once he realized that his brother had created a species unable to stand on its own in the new world, Prometheus set forth to fix the mistake and make human beings strong and capable of surviving among earth’s other inhabitants.First, Prometheus decided to help the humans stand upright like the gods. He turned their heads upward to the sky. This adjustment gave them the power to reason. Then he raced to the heavens where he lit a torch, using the fire of the sun. He used this fire to light up the new creatures’ powers of thought and speech. These special powers helped set the humans apart from the other animals.At first, the gods approved of Prometheus’s work. They were glad to see that there was a species on earth that had the ability to think and speak. But Prometheus was still not atisfied. He saw that Epimetheus’s poor planning had left the new humans physically weak compared to the other inhabitants of the earth. They were hungry, sad, and scared. Finally, to help the humans, Prometheus left Mount Olympus and went to live on earth with the people, in order to teach them the skills they would need to survive in the new world.

First, Prometheus showed the humans how to build houses so they would not have to live in caves. Then he
taught them how to read, and how to write numbers and letters. He helped the people learn how to tame animals and how to sail on the seas. He showed them how to heal themselves when they were sick. After he had shown the people how to foretell the future and recognize omens by looking at the way birds flew, some of the other gods became impressed by the new people. They decided to help, too. Demeter, the Olympian earth goddess, taught the new race of creatures about edible plants. With this help,the humans had better access to food, and they began to prosper and live happily for the first time.Although some of the gods were excited about the development of the humans, other gods were beginning to worry that the humans were becoming too powerful.However, despite the growing concerns of his fellow gods,Prometheus was so pleased with his creations that he decided to help the humans even more. Until this time,humans were only allowed to slaughter other animals if they were performing a sacrifice to the gods. They ate only the plants that Demeter instructed them to eat.Prometheus could see that the humans would probably need to eat the meat of other animals to survive.So Prometheus came up with a plan. First, he cut up an ox, as if for a sacrifice. Then, he divided the sections into two piles. In one pile, Prometheus wrapped up the bones of the ox and hid them under shiny morsels of fat. This pile looked like the more attractive offering in a sacrifice.For the other pile, Prometheus took the lean meat and other edible parts of the ox and wrapped them in hide, topping the pile with entrails to make the offering look disgusting. Once this was done, Prometheus asked Zeus to choose one of the two piles and keep it as the sacrificial offering; the humans would take whichever pile Zeus rejected. Not knowing that the good meat was actually hidden beneath the hide and entrails, Zeus chose the pile shimmering with fat. Once Zeus had made his choice, he had to stick with it, even after he discovered that he had chosen a pile with no edible meat in it.From then on, people offered the fat and bones of animals to the gods, and they kept the savory parts of the animals for themselves. Zeus was outraged that Prometheus had tricked him, but he decided to save his revenge for later. 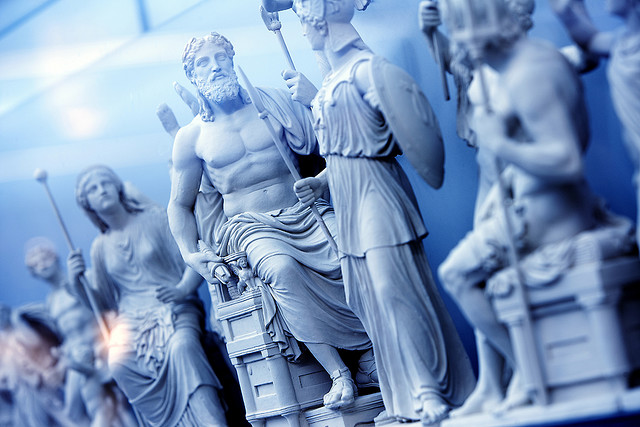 This was not the only trick Prometheus played on the Olympian gods for the sake of the humans.Since the new race of creatures had no fur, they were often cold, and even though they were now allowed to eat meat, they had no way to cook it. Human beings did not know about fire or how to control it because, until this point, fire belonged only to the gods. Prometheus decided to change things.He went up to heaven and secretly stole fire from the gods.Hiding the fire inside the stalk of a fennel plant,Prometheus brought it back to the people on earth.Then he taught the people how to cook grains and meat, and how to keep fire burning so that it would always be available. Prometheus also showed the humans how they could use fire to forge metal, just as Hephaestus, the god of fire and the forge, was doing on Mount Olympus.Prometheus did all these things to help the humans because he wanted them to survive in the world now populated by other, more physically powerful creatures.Unfortunately, Prometheus’s efforts angered some of the other gods.The new people were getting too powerful and too smart. Zeus thought they needed to be stopped before they believed their own powers were supreme and they no longer heeded the authority of the gods. Furthermore, Zeus was furious with Prometheus for all his tricks.To punish Prometheus for tricking the king of the gods and for making humans so powerful, Zeus had him captured and chained to a rock on the crest of one of the
Caucasus Mountains.Every day, an enormous eagle came to the spot where Prometheus was tied. The eagle was fierce and relentless, and each day it swooped down and pecked away at Prometheus’s liver, devouring the greater part of it. Because Prometheus was immortal, his liver grew back every night, and he never died. Despite this intense torture, he endured the punishment for thirty years until Hercules came and freed him.
Unfortunately, punishing only Prometheus did not satisfy Zeus’s desire for revenge. The king of the gods had
other plans that would affect the entire human race, and it was a punishment that would last forever.