The Literature of Classical Greece

The golden age of classical Greece lasted from the early fifth to the late fourth century BC,
and was concentrated in Asia Minor and the Greek Isles. Although this era ended nearly
2,500 years ago, the influence of its civilization can still be felt in today’s world. It is
particularly apparent in the realm of literature, where modern Western literary traditions owe
much to classical and ancient Greek myths and traditions.
Classical Greek literature developed out of an even older tradition of oral storytelling. For
centuries, literacy was rare, and oral storytelling was the only way to transmit information to
large groups of people. To aid the memory, wandering poets would set histories, legends, and
religious stories into verse. Other poets would then memorize these epics, and the
information could be passed on to the next generation. Such poems were generally set to
music and sung, sometimes with the accompaniment of instruments or simple dances. These
performances provided entertainment and education at the same time. 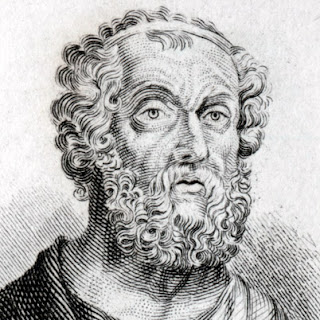 Around the eighth century BC, a poet who lived in Asia Minor began preserving these ballads
and epic tales in writing. Although historical evidence is scanty, it is generally believed that
this literary pioneer was named Homer. The famous heroic epic poems The Iliad and The
Odyssey are both the work of this skilled poet. They are some of the earliest examples of
Greek literature that have survived to this day, and are of interest to scholars not only for their
historical value, but for the beauty of their language and imagery.
In the centuries after Homer, Greek literature continued to develop. Literacy became more
common, but poetry remained the most popular way of spreading information to the people.
The manner in which the poems were presented, however, became more sophisticated. While the early poems of the Homeric age were set to music and performed by the poet, sometimes with the aid of instruments or dance, the poems of the sixth century BC had developed into something more like plays. An actor would take turns reciting the lines of a poem with a
chorus, or group of dancers. Often the actor and the members of the chorus would wear masks, and the chorus would complement the poetry with interpretive dances.

These new plays were generally performed at festivals honoring gods and goddesses, or
celebrations of seasonal events, such as the first grain harvest or the summer rains. Formal
competitions, where poets and playwrights would submit their work and vie for prizes,
became popular. One of the most famous of these was the Great Dionysia, held during a
springtime festival in Athens to honor the god Dionysus.In the early years of the fifth century, Greek literature, theater, and culture began to blossom, and great advances were made in the sciences and the arts. The world of Greek literature was affected greatly, and several distinct varieties of dramatic poetry began to appear. The standard heroic epics of previous centuries were replaced by increasingly sophisticated tragic and comic plays with elaborate plots, character development, and production techniques.Although these two types of plays were staged in very similar ways, they differed greatly in content. Tragic plays, despite the name, were not necessarily sad. They were earnestly dramatic, and dealt with a range of complex and serious topics such as psychology,philosophy, and morality. Comic plays, on the other hand, were filled with bawdy and raucous jokes, and were intended to provoke laughter and to entertain. Despite their light and
humorous presentation, some of the better comic playwrights used these plays to express
genuine and serious political and social commentary.

Both these types of plays benefited greatly from the innovations in technique introduced by
the fifth-century tragic playwright Aeschylus. His contributions to tragic Greek theater were
so great that he is still remembered as the Father of Tragedy. An incredibly popular and
original playwright, he introduced the idea of having multiple actors on the stage at one time,
and pioneered the idea of using costumes and visual effects such as paintings and scenery.
His work changed forever the way Greeks would view poetry and theater.
Aeschylus was only the first of the great classic Greek dramatists. The generation that
followed brought several other talented and powerful tragic playwrights. The most famous of
these were Sophocles and Euripides. Both writers did much to expand the traditionally simple
expectations of characters in plays. Sophocles’ plays feature incredibly strong-willed, modern
characters who struggle with serious moral concerns, and Euripides wrote some of the most
chilling psychological dramas of classical Greece.
Comic theater also had its hero. A generation younger than Sophocles and Euripides, the
comic playwright Aristophanes is today regarded as the best of the classic comic playwrights.

His sometimes absurd, and sometimes elegant plays demonstrate a great skill in mixing
comedy with honest and sincere ideas. Aristophanes’ plays certainly contain many wild and
vulgar jokes, yet they also discuss serious concerns of his time, such as politics, art, and
education. His work provides modern readers with some of the clearest images of the life and
daily affairs of fifth-century Greeks.
This literary revolution in the early part of the fifth century was not limited to the stage. The
world of philosophy also experienced an awakening. Skills such as oration, logic, and
rhetoric were polished, and the study of mathematics and the sciences was encouraged.
Philosophers such as Socrates became famous for wandering about the city of Athens,
engaging students and scholars in lively academic debates about morality and politics.
Socrates’ most famous pupil, Plato, wrote a number of books and dialogs in which he
explains the philosophy and thoughts of his teacher, and goes on to develop the ideas further.
His work—which deals with a wide range of theoretical concerns, such as politics, ethics, and
the importance of friendship—is invaluable for modern scholars who wish to understand the
ancient Greek mindset.

Another very well-known philosopher of the time was Aristotle. Aristotle was, in his turn, a
pupil of Plato’s, and is best known for his numerous texts dealing with the natural sciences.
Interested in almost every conceivable topic, Aristotle left behind texts detailing his thoughts
and questions on physics and astronomy, as well as meteorology, sleep patterns, raising
animals, and numerous other subjects.
The age of classical Greece drew to a close with the end of the fourth century BC. Yet
through its literature, classical Greece still has an enormous effect on modern Western
thought and traditions. Almost all Western literature, from histories to romance novels, from
thrillers to poetry, is rooted in classical Greek traditions. Many of the themes present in those
ancient plays and poems are in fact still popular in modern literature. And even those plays
that deal with uniquely modern themes still owe much in the way of technique and style to
the golden age of Greece.
Αναρτήθηκε από Unknown