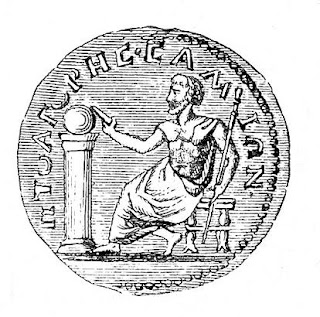 Ancient Greece and the Discovery of Ideas

It is, today, a commonly believed myth that before the time of Columbus, everyone thought that the Earth was flat, and located in the center of the Universe, with the rest of the Universe orbiting around it. In fact, over 2,000 years ago, Greek scientists, using only the simplest instruments, developed an advanced conception of the Universe that could have explained the ordering of the Solar System, and how this ordering determined the seasonal cycles on the Earth. They had even discovered the precession of the equinoxes to begin comprehending the longer astronomical cycles.Greek astronomy was based on a scientific method which was in opposition to the methods used in ancient Babylon--the Babylonian world-view being based on magic, and the Babylonians showing no interest, at any time in their history, in developing a unified conception of the cosmos. The Babylonian oligarchy used a pantheon of cults to control the population, and the priest caste studied the heavens, not for the sake of understanding, but for the purposed of omen astrology and for the improvement of their calendar, which was a lunar one, unlike the superior Egyptian solar calendar.

The Babylonians left behind thousands of cuneiform tablets pertaining to astronomy. However, in the Babylonian approach, not even a trace of a geometrical model is to be found. Instead, they developed numerical methods using arithmetic progressions, in a fashion that would remind one of Euler. Using these methods, they were able to predict certain phenomena with the Moon, within an accuracy of a few minutes. Although they compiled almost complete lists of eclipses going all the way back to 747 B.C., the Babylonians collected almost no reliable data on the motion of the planets. They never developed accurate methods for measuring the location of celestial objects, and saw no reason to hypothesize models of what was happening in the heavens.Greek science developed as part of a cultural current which rejected the domination of an oligarchy. In the Homeric epics, man was presented matching his wits against the tyrannical Greek gods. In Aeschyluss play, "Prometheus Bond," the main character, Prometheus (the Greek word for forethought) gives science to mankind, to free him from the irrational pagan gods.Greek culture, was, itself, split between a pro-republican and an oligarchical view, which is brought into sharpest relief by the opposing outlooks of Plato and Aristotle. Plato supplied the scientific method which has guided science ever since. he launched a research project to find out "what are the uniform and ordered movements by the assumption of which the apparent movements of the planets can be accounted for?"Around 150 A.D., under the Roman Empire, the fraudulent astronomy of Ptolemy was imposed, which was based on the ideology of Aristotle. Perhaps as a result of this, the cosmological writings of the Greeks, with few exceptions, were not preserved, so the only records that exist are usually descriptions by later commentators. Therefore, we must reconstruct these discoveries, based on knowing how the mind functions.

Unlike the Babylonians, the ancient Greek astronomers sought a geometrical ordering principle behind the phenomena which are visible in the heavens. An early Greek astronomer would have seen that the motion of the objects in the sky appeared to follow regular cycles. As well, the cycles of the Sun, Moon, stars, and planets did not exactly correspond, giving rise to longer, subsuming cycles.Each day he would see the sun appear to rise in the east, cross the sky, and set in the west. The Moon too rises in the east, crosses the sky, and sets. However, the Moon seems to travel more slowly than the sun, with the Sun going through a complete extra cycle in approximately 29.5 days (in other words, the Moon's cycle is not an exact multiple of the Sun's). The appearance of the Moon also changes-that is, it waxes and wanes-going through a complete cycle of phases approximately every 29.5 days.At night, the Greek observer would see stars, most of which appeared to maintain a fixed relationship to each other (hence, constellations-and hence the fact that most of the names we have today for constellations are derived from the names the Greeks gave them). The Greeks developed a conception of a celestial sphere to explain the fixed relationship of these stars. The "fixed stars" rotated as a group throughout the night, around a point in the northern sky which appeared to not move. Also, the position of the "fixed stars" appeared to shift slightly, from day to day, with the same east-to-west rotation. This slight shift, from day to day, in the fixed stars, appeared to go through a complete cycle each year, corresponding to the cycle of the seasons. A number of other cycles corresponded to the year. The Sun's path across the sky changed each day, following a yearly cycle. The daily cycle (e.g., the rotation of the Earth on its axis in 24 hours) and the yearly cycle (e.g., the Earth's yearlong revolution around the Sun, producing the seasons), were expressed by Plato in the Timaeus as the motion of the Same and the motion of the Other.

In addition to the "fixed stars" of the celestial sphere there were a few objects which they named planets, meaning wanderers, because, although they looked like stars, they did not remain in the same position relative to the "fixed stars" on the celestial sphere, but were constantly moving with respect to them.One of the first known Greek astronomers, Thales (ca. 624 to 547 B.C.), is reported to have measured the size of the sun and the Moon, as viewed from Earth, at approximately one-half degree. Thales is thought to have developed basic relations of similar triangles, such as demonstrating that the ratio of two sides is the same for similar triangles, and used this principle to measure relations in the cosmos.Pythagoras (b. 572 B.C.) is credited with discovering that the Earth is approximately a sphere, and that the "morning star" and the "evening star" were the same-what we today call Venus. He is also credited with discovering that the musical intervals are determined by number, by the same laws of harmony as those which govern music.

Since no writings from Pythagoras or his followers have survived, we can only speculate how he discovered that the earth is spherical. He might have concluded this based on conceptualizing the cause of eclipses. The discovery of the cause of eclipses is attributed to Anaxagoras (500-428 B.C.), who hypothesized that the Sun was a red hot stone, and the Moon made of earth, for which he was accused of impiety by those who considered the heavenly bodies gods themselves. He recognized that the source of the Moon's light is the reflection of sunlight. He is credited with discovering that an eclipse of the Moon is caused by the Earth blocking the Sun's light from shining on the Moon, and that an eclipse of the Sun is caused by the Moon blocking the Sun's light from reaching the Earth.Eclipses of the Moon give evidence that the Earth is spherical. The shadow that the Earth makes on the Moon during an eclipse is always circular, regardless of the direction from which the sun is shining. This could only be true if the Earth were a sphere, as the geometry that the Greeks were then developing showed.Pythagoras may have discovered that the Earth is spherical by conceptualizing the idea of curvature that enabled the great Eratosthenes, some 300 years later, to design his famous experiment to measure the circumference of the Earth. Finally, Pythagoras could have concluded that this must be true, because he recognized that the Universe is ordered by geometry and he thought that "the sphere is the most beautiful of solid figures."
Αναρτήθηκε από Unknown