The Amazon warrior queen Penthesilea was a favorite character for ancient Greek authors, who rhapsodized about her courage and great beauty, and her epic life continues to inspire writers and artists today. After accidentally killing her beloved sister during an unfortunate hunting accident, Penthesilea led a team of Amazons to liberate the ancient city of Troy with the hopes that she would be killed in battle. Against great odds, Penthesilea’s all-female army nearly beat the Greeks, until the great Greek hero Achilles interfered. He spotted Penthesilea in all her bloody glory across the battlefield, and approached with the intention of killing his seemingly unstoppable female enemy. Achilles fought her to the death, falling in love with the Amazon just as he delivered the final blow. And the tragic tale hardly ends there. Varied and contradictory accounts of Penthesilea’s adventurous life and violent death exist, but all versions point to the heroine’s fearlessness, incredible power and propensity for finding herself in the midst of high drama.

Daughter of War In Greek mythology, Penthesilea was the daughter of Ares, the god of war, and Otrera, an Amazon queen. (In some accounts, Penthesilea is the daughter of Orithyia.) Growing up amid the Amazons, Penthesilea became known not only for her bravery and skill with numerous weapons, but also for her intelligence and inventiveness. In fact, the Roman historian Pliny credited Penthesilea with creating the “battle-axe”. Penthesilea’s youthful prowess was spent largely on hunting. During one such hunt, Boreas, god of the north wind, blew her spear off course. The spear struck Penthesilea’s sister, Hippolyte, and killed her. Grief-stricken, Penthesilea set out to expiate her sorrowful act. She visited King Priam of Troy, looking for his absolution. The Siege of Troy At the time of Penthesilea’s arrival in Troy, the city had been under siege by the Greeks for ten years. Hector, the great Trojan hero who was formerly Troy’s champion, had just been killed in battle. King Priam struck a deal with Penthesilea: In return for her purification, the Amazons would defend Troy from siege by the Greeks. It was a good deal for Priam, as the Amazons were known to fight with great ferocity. For Penthesilea, fighting against the Greeks was a good way to ensure her own death. (The Amazons believed that the only way to find peace in the next life was to die in battle.

Since the Greeks dominated the Trojan forces, it seemed the Penthesilea would certainly attain her death wish.) With spear at the ready, and attended by her personal guard of 12 Amazons, Penthesilea rode out from Troy’s gates. On the battlefield, these women killed many legendary Greek warriors, including Menippus, who fell to Clonie, one of Penthesilea’s lieutenants. In response, one of Menippus’ comrades disemboweled Clonie with his sword. Penthesilea, with a cry of rage, leapt at him and cut off the arm that had slain her Amazon companion. The Greek, spewing blood, stood before the vengeful Penthesilea in shock—and then quickly fled all the way back to his encampment. Some of the other men followed swiftly at his heels. Enter Achilles Looking out across the battlefield, the Greek hero Achilles saw Penthesilea and the Amazons celebrating amidst the bloodshed. His colleague Ajax held back the Trojan forces so that Achilles could reach the Amazon queen, knowing that he alone stood a chance against her. They clashed in heated combat first on horseback, then on foot. Achilles was impervious to harm (except for his famously vulnerable heel) thanks to protection from the Greek god Zeus, and Penthesilea was too often on the defense. Despite her extraordinary prowess, she eventually grew tired from the relentless assault. Achilles took advantage of her fatigue and, in an instant, plunged his sword deep into her breast.

The moment that Achilles killed his Amazon adversary was when he fell in love with her. After removing the fallen Amazon’s helmet, the hero was so overwhelmed by her beauty that he began to cry. One of his lieutenants, Thersites, laughed at him (or, in some tellings, mutilated Penthesilea’s corpse). Achilles responded to this disrespect by killing Thersites. Some ancient Greek accounts say the enraged Greeks burned Penthesilea’s body and threw the remains into a nearby river. Whereas some Roman sources give her death more dignity, relating that the Trojans, who were grateful for her service, afforded her an honorary funeral pyre. 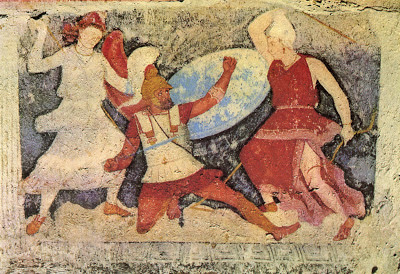 Almost A warrior queen must have a death that befits a bold life, and the grisly events that occurred before and after Penthesilea’s death were subjects ancient artists revisited frequently. In addition to many appearances in ancient Greek verse, the battle between Penthesilea and Achilles was a favorite scene for Greek vase painters. Exekias signed a famous wine jar dating to about 540 BCE that depicts Achilles killing Penthesilea. Several other vases depicting the Amazon queen are credited to “the Penthesilea Painter.” No matter how many times her legendary story is retold and the details of her life vary, the end, sadly, will always be the same. In Benjamin Hederich’s Mythological Lexicon (1724), Penthesilea strikes the fatal blow first, stabbing Achilles in his heel with her spear and ending his life. Even though Achilles is brought back to life by Zeus and eventually kills Penthesilea, perhaps this version of her story is a tribute to her legendary reputation. Penthesilea was recognized as a courageous woman warrior who almost beat the most dominant of male heroes. And although she was beautiful, she was as respected for her wisdom and military skills as much as she was for her appearance.
Αναρτήθηκε από Unknown