A dichroic glass cup with a mythological scene 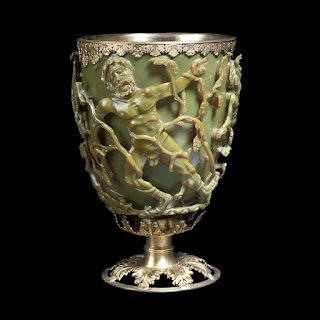 This extraordinary cup is the only complete example of a very special type of glass, known as dichroic, which changes colour when held up to the light. The opaque green cup turns to a glowing translucent red when light is shone through it. The glass contains tiny amounts of colloidal gold and silver, which give it these unusual optical properties.The cup is also the only figural example of a type of vessel known as a 'cage-cup'. The cup was made by blowing or casting a thick glass blank. This was then cut and ground away until the figures were left in high relief. Sections of the figures are almost standing free and connected only by 'bridges' to the surface of the vessel.The scene on the cup depicts an episode from the myth of Lycurgus, a king of the Thracians (around 800 BC).The figure of Lycurgus, bound by the vine and naked apart from boots, is flanked on the left by a crouching Ambrosia, at a considerably smaller scale. Behind her one of Dionysus's satyrs (shown with a normal human form) stands on one foot as he prepares to hurl a large rock at Lycurgus. In his other hand he holds a pedum or shepherd's crook. To the right of Lycurgus comes first a figure of Pan, then at his feet rather canine-looking panther, the traditional companion of Dionysus, whose face is missing but was presumably snapping at the king, and then the god himself, taunting him with his right arm extended in an angry gesture. Dionysus carries a thyrsus, the special staff of the god and his followers, and his dress has an Eastern, perhaps Indian, flavour, reflecting what the Ancient Greeks generally believed about the origins of his cult. The calf section of one leg has been lost. A streamer hanging behind him from his thyrsus overlaps the raised foot of the satyr with the rock, completing the circle of the cup

It has been suggested that this not very common scene was a reference to the defeat in 324 by the Emperor Constantine I of his co-emperor Licinius, who was killed in 325 after a period under close guard.Another suggestion is that the colour change from green to red was understood as evoking the ripening of red grapes, so that there was a particular suitability in depicting a scene with the god of wine. The cup may have been intended for use at Bacchic cult celebrations, still very much a feature of Roman religious life around 300. A letter suppposedly from the Emperor Hadrian (d. 138) to his brother-in-law Servianus, quoted in a biography in the Historia Augusta, records the gift of two dichroic cups, which the 4th century author had seen: "I have sent you particoloured cups that change colour, presented to me by the priest of a temple. They are specially dedicated to you and my sister. I would like you to use them at banquets on feast days."
Other depictions of the story tend to either depict Lycurgus attacking Ambrosia, often with a double-headed axe, while her companions rush to her aid, or Lycurgus alone, entangled in the vine. The closest parallel to the scene on the cup is one of the apse mosaics in the triconch triclinium at the Villa del Casale, Piazza Armerina, which may also refer to Licinius. There is also a mosaic at Antioch on the Orontes, and a group on a 2nd century sarcophagus at the Villa Parisi in Frascati.There is also a floor-mosaic from Vienne, now in the museum at Saint-Romain-en-Gal, with Lycurgus alone inside the vine.The preceding scene of Lycurgus attacking Ambrosia, is on a floor-mosaic at Brading Roman Villa on the Isle of Wight.Of this and similar mosaics, Martin Henig says: "In cases such as this, we are not concerned with simple, popular paganism but with recondite knowledge. This is the sort of esoteric religion which the Emperor Julian, Symmachus, Praetextatus, Macrobius and Proclus relished. The religious thought behind these floors is probably deeper and more complex than contemporary Christianity and many of the keys to understanding it have been lost."

The dichroic effect is achieved by making the glass with tiny proportions of minutely ground gold and silver dust. To a conventionally composed Roman glass flux 330 parts per million of silver and 40 of gold were added: "These particles were precipitated as colloids and form a silver-gold alloy. When viewed in reflected light the minute metallic particles are just coarse enough to reflect enough of the light without eliminating the transmission. In transmitted light the fine particles scatter the blue end of the spectrum more effectively than the red end, resulting in red transmission, and this is the colour observed. Since it is impossible that the Roman artisans managed to add these incredibly low levels of silver and gold to the volume of the glass used to make the vessel deliberately, the levels were probably added at higher levels to a larger volume of glass-melt, and increasingly diluted by adding more glass." The particles are only about 70 nanometers across, and embedded in the glass, so they cannot be seen by optical microscopy, and a transmission electron microscope is needed instead.At this size they approach the size of the wavelengths of visible light, and a surface plasmon resonance effect takes place.The interior of the cup is mostly smooth, but behind the main figures the glass has been hollowed out, well beyond even the main outer surface, so that they are of similar thickness to the main outer surface, giving an even colour when light passes through. This is a feature unique among surviving cups; Harden suggests they were an "afterthought".An area around the torso of Lycurgus is a rather different colour from the rest of the glass; perhaps an accident of manufacture, but one exploited by the glass-cutter "so that he could make Lycurgus's rage glow even more strongly".After the very lengthy cutting stage the fine polished appearance was achieved by a process called "flame polishing" that risked the complete loss of the object.A suggestion in 1995 that in fact this and other cage cups used a mixture of moulding and cutting has met with little acceptance. 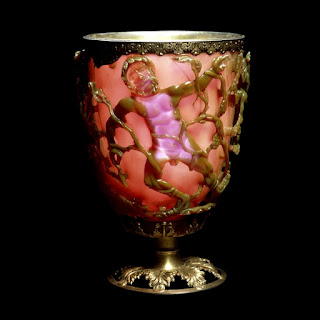 Like the British Museum's other spectacular work in Roman glass, the cameo glass Portland Vase, the cup represents to some extent the extension of skills developed by cutters of engraved gems, or the larger hardstone carving of vessels in semi-precious stones, which were luxury arts with enormous prestige in ancient Rome. No carved gemstone vessels directly comparable to either work are known, but the general taste behind these extreme exhibitions of glass-making skill is one formed by objects in natural stones like the Coupe des Ptolémées or the Rubens Vase. Indeed it was not until the first full studies of the cup in 1950 that it was established for certain that the material was glass and not a gemstone, which had previously been in question.It seems likely that as many of three separate workshops or factories will have been involved in the whole process, perhaps not in the same part of the Empire. The glass may have been initially made in a large block of standard clear glass, perhaps in Egypt or Palestine, which both exported great quantities of glass for forming, and sometimes colouring, elsewhere. The thick "blank" dichroic vessel was probably made by one specialist workshop and passed to another consisting of specialist cutters. This would certainly have been a rare and highly expensive object, and the secrets of its manufacture, possibly not well understood even by its makers, seem only to have been used for about a century.There are various small losses, of which face of the panther is the most significant, and the cup is cracked; the British Museum has never removed the metal rim for this reason. The base or foot of the cup is damaged, and the original form of the base uncertain. The Metropolitan Museum of Art, in New York has a fragment measuring 2 3/16 x 3 in. (56 x 76 mm) of a satyr from a dichroic cage cup that turns from olive green to "reddish amber".


The cup was probably designed for drinking from at feasts, or more specifically Bacchic cult celebrations,where the lack of a foot, also a feature found in other cage-cups, may mean it was passed around, as elaborate cups often were in medieval cultures. Alternatively other cage cups were almost certainly used, suspended, as oil lamps, where the dichroic effect of this cup would show to advantage.
Αναρτήθηκε από Unknown