Sculpture and Art in Ancient Greece 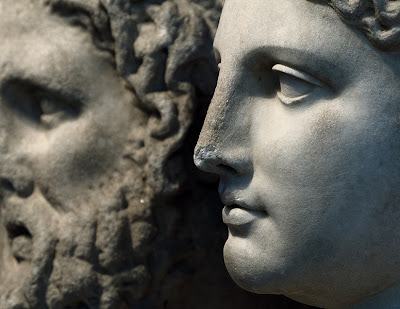 Greek art and sculpture has had a profound effect throughout the ages. Many of the styles have been reproduced and copied by some of what the modern day audiences would class as some of the finest artists to have ever lived.Western art and sculpture derived from Roman art, while in the East, Alexander the Great's conquest gave birth to Greco-Buddhist art, which haseven had an influence as far as Japan all of which stem from ancient Greek art.The Greeks used many different types of materials in their sculptures including stone,marble and limestone as these were abundant in Greece. Other materials such as clay were also used but due to their brittle nature very few have survived.Greek sculptures are very important as the vast majority of them tell us a story about Gods, Heroes, Events, Mythical Creatures and Greek culture in general.Many of the statues that have survived are actually of Roman origin. Like many people today the Romans had a deep respect for Greek sculptures and many were copied. If the Romans had not made these copies, many of the Greek Legends and stories that we know today would have been lost to antiquity. Greek sculptures are mainly divided into seven time periods - Mycenaean Art, Sub-Mycenaean or DarkAge, Proto-Geometric, Geometric Art, Archaic, Classical and Hellenistic. 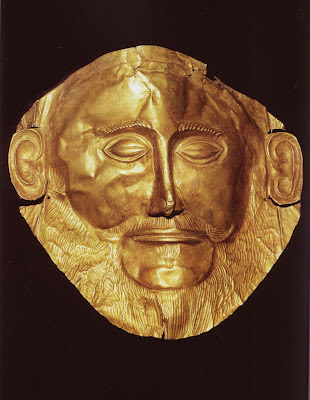 Mycenaean art is the first era in which we find surviving examples of Greek art. This era dates from around 1550 BC to 1200 BC on the Greek mainland.The Mycenaeans where technologically advanced. The Greeks learnt how to build gates and tombs (such as Agamemnon's tomb in the 'Bee-hive') and how to use different metals in art. The famous Cyclopean Wall of Mycenae before the lion gate is a good example of  masonry skills. The Mycenaeans were also fantastic goldsmiths which can be seen from finds such as 'Agamemnon's Death Mask' found in a grave dating back to the16th Century. Other items such as ivory figures (the head of a warrior with boars'tuck helmet) and a Rock Crystal 'sauceboat' dating between the 16th and 13th Century show they could craft out of other materials as well.Around 1200 BC, attributed to the Homeric Fall of Troy, seems to be the down fallof Mycenaean art, this time period being known as the Sub-Mycenaean or the Dark Ages. This time period lasted from around 1100 to 1025 BC and very few examples of statutes or art have been found. The few items that have been found show no new methods or innovation. This is probably due to the constant wars and invasions which crippled the growth of their civilisation during that time. The next phase (ca. 1025 - 900 BC) is known as the Proto-Geometric art era. We begin to find pottery starting to be decorated with simple shapes, wavy lines and black hands. It is thought that this time period was the Greeks' first expression of reviving their civilisation. With the invention of faster pottery wheels and other innovations it is believed that experimenting with pottery began. Notable examples of this era have a broad horizontal band about the neck and belly,concentric circles applied with a compass and multiple brushes. They are mainly of abstract elements.

Geometric Art dates from around 900 - 700 BC and was a dramatic transformation that led to the establishment of primary Greek institutions such as the Greek city -state (polis) and the Greek alphabet. Sculptures and carvings began to be made representing each city states' heroes and past legends including animals and humans. The growth of new trade routes and the opportunities for colonisation permitted Greek art to flourish. Large temples and sanctuaries were built intribute to the Gods and were furnished with precious statues and art. The armed warrior, the chariot, and the horse are the most familiar symbols of the Geometric period. The only thing that was yet to emerge from this newly burgeoning Greek passion for the arts was the solid stone statue.With the newly established trade routes in the Levant and the Nile Delta we begin to see an amalgamation of Greek and oriental art. This led to the Archaic age (ca.700 - 450 BC) which showed a more naturalistic style reflecting significant influence from the Near East and Egypt. This is known as the Orientalising Phase(735 - 650 BC) and happened gradually. Many Greek artists began to assimilate ideas from their Eastern counterparts, starting to use palmette and lotus compositions, animal hunts and such composite beasts as griffins (part bird, partlion), sphinxes (part woman, part winged lion), and sirens (part woman, part bird).Competition between the Greek artists throughout the Greek mainland and colonies began to emerge to see who could produce the greatest and most innovative marvels. Sculptors in the Aegean islands, notably on Naxos and Samos,carved large-scale statues in marble. Goldsmiths on Rhodes specialized in fine jewellery, while bronze workers on Crete fashioned armour and plaques decoratedwith superb reliefs. The prominent artistic centres of mainland Greece, notably Sparta, Corinth, and Athens, also exhibited significant regional variation. Sparta and its neighbours in Laconia produced remarkable ivory carvings and distinctive bronzes. Corinthian artisans invented a style of silhouetted forms that focused ontapestry-like patterns of small animals and plant motifs. By contrast, the vase painters of Athens were more inclined to illustrate mythological scenes.

Despite the differences in dialect - even the way the alphabet was written varied from region to region at this time - the Greek language was a major unifying factor in Greece as it is today with English speaking countries. Huge sanctuaries and temples were built and decorated with the finest motifs, as competition was fierce in the Greek world to surpass previous works of art. The Archaic age was best known for the emergence of stone statues of humans, such as the limestone kouros (male) and kore (female) statues.These new statues showed young humans naked and always with a smile on their face. The main aim was to try and show perfection in human form, however, the majority of statues came across as rigid and unnatural. Despite these flaws it wa sthe Greeks who first invented the free standing statues during this era. Athens, by 550 BC, had perfected the use of 'black figure pottery' which it subsequently successfully exported throughout the Greek world. Among the great painters of Attic black-figure vases, Sophilos, Kleitias, Nearchos, Lydos, Exekias, and theAmasis Painter experimented with a variety of techniques to overcome the limitations of black-figure painting with its emphasis on silhouette and incised detail. The consequent invention of the red-figure technique, which offered greater opportunities for drawing and eventually superseded black-figure, is conventionally dated about 530 B.C. and attributed to the workshop of the potter Andokides.
Αναρτήθηκε από Unknown