Artemis the Virgin Goddess of Hunting 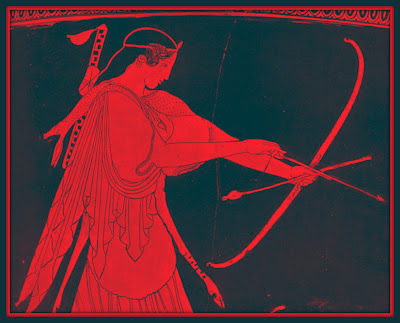 Artemis is the sister of Apollo. This bond in mythic genealogy results from their association in cult. Here we can observe the special role of Delos, where both were born to Leto, as we have seen, and where both had a temple in the same precinct, as did Zeus and Hera at Olympia. This contrasts markedly with Delphi, which is exclusively Apollo’s site (except that Dionysus shares it during the winter months).In the mythology, Artemis is a huntress, accompanied by the nymphs. Hunting is, however, in reality a man’s pursuit and a dangerous one, pursued in wild and uninhabited places. Myth tells of boar hunts, notably that of Meleager, and warriors in Homer and in the Mycenaean age could wear a boar’s tusk helmet. Odysseus had a wound from a boar hunt in which he had engaged at adolescence whilst under the tutelage of his maternal grandfather, and in historical times no Macedonian noble might become a man until he had slain his first boar. Why then is a virgin goddess hunting in the wilds with nubile (but untouchable) teenage goddesses? And why is it that the nubile maiden Iphigeneia must be sacrificed to her at Aulis, or swapped for a deer, and why is it that Callisto in Arcadia must be turned into a bear? The myths bring together themes of importance for the dynamics of a successful society. It is only through confrontation with the wild, if usually in myth rather than cult, and through a dangerous but protected transition, where their normal roles are inverted, that girls can become tamed in subjection to men through the institution of marriage.

A similar logic pervades the mythology of the Amazons, where the transitional independence of young women is marked even more strongly by their impossible characterization as warriors. Artemis, then, is the goddess of the transition, a transition in which men have no part – as is shown by the myth of Actaeon, torn apart by his own hounds as a result of witnessing Artemis and the nymphs, a forbidden mystery. She completes this transition as Artemis Locheia, to whom women may appeal and childbirth and in whose shrine they may gratefully hang up clothing as a thank-offering, their transition to womanhood complete. Artemis is accordingly the goddess at Brauron, a moist, marshy place at the coastal fringes of Attica where Athenian girls’ rites are practiced. The place itself has a ‘‘marginal’’ feel, an almost eerie combination of fertility and remoteness. At Patrae too, the priestess of the major cult of Artemis Triclaria was a girl, who retained that priesthood until she married (Pausanias 7.19). Here there were grim tales that the most attractive boy and girl had been sacrificed to Artemis annually, owing to an adolescent pair, Melanippus and Comaetho, prematurely having had sex in the shrine. At Halae in Attica the cult of Artemis Tauropolos saw a mock-human sacrifice every year, associated with how – at least in Euripides’ Iphigeneia amongst the Tauri – Orestes had almost been sacrificed by Artemis’ priestess, his sister Iphigeneia. Everywhere we see the goddess angered, often in the wild or in connection with an animal (a deer or a bear), and often demanding human sacrifices that somehow never seem actually to have happened at any point where there is historical evidence. What matters is the image and the ideology, in which the god consists, winding in and out of Greek mythology and crossing cult sites, some active (Brauron), some lost in the mists of time (Aulis).

Related to these phenomena are the cults we find at the mouth of the Alpheius, a river whose plan to take her virginity had been foiled by a girls’ ritual in which Artemis and the nymphs all smeared their faces with mud during an all-night festival.Here the river flows grandly on from Olympia and reaches the final stages of its path to the sea: At its mouth, around 80 stades [12.5 km] from Olympia, is the grove of Artemis Alpheionia or Alpheiousa [i.e., Artemis of the Alpheius] – it is said both ways. There is a grand festival to this goddess at Olympia annually, just as there is to Elaphia [Artemis of Deer] and Daphnia [Artemis of Laurel]. The whole land is full of Artemisia [i.e., Artemisions, shrines of Artemis], Aphrodisia, and Nymphaia – amidst groves that are for the most part full of flowers due to the abundance of water.

And there are many Hermaia on the roads and Poseidia on the headlands.In the shrine of [Artemis] Alpheionia there are paintings by Cleanthes and Aregon – by the former a Capture of Troy and a Birth of Athene, by the latter an Artemis Borne Aloft on a Griffin. (Strabo C343) I have quoted this passage, remarkably lyrical for the geographer Strabo (64 BC– ca. AD 25), at some length for the wonderful sense that it gives of the place of the gods in the imagination, lives, and environment of the Greeks, a place that cannot be conjured up by statements that Artemis is goddess of the hunt.Less lyrical, however, is the cult of Artemis Laphria (perhaps, the ‘‘Devouring’’) at Patrae. There we find a stupendous procession culminating in the arrival of a maiden
priestess riding in a float drawn by deer! The altar, of tinder-dry wood, has already been prepared. And the next day: They throw, living, onto the altar edible birds and likewise all the victims, and in addition wild boars and deer and gazelles. Some even bring the cubs of wolves and of bears, others full-grown beasts. And they place upon the altar the fruit of cultivated trees. Then they light the wood. At this point I have even seen, say, a bear or some other animal, either forced outwards by the first onrush of the fire, or even escaping through brute strength. Those who threw them on bring them back again to the fire. And they recount that no one has ever been injured by the animals. (Pausanias 7.18.12–13)

Out beyond this, Artemis may turn into a major goddess of the city, as in effect she is in Patrae and in Aetolian Calydon, the scene of Meleager’s boar hunt and the origin of the cult of Artemis Laphria. Her domination of a city is, however, more frequent in Asia Minor, and this is what is represented by the cult at Ephesus (above). This, then, is an area phenomenon.
Αναρτήθηκε από Unknown