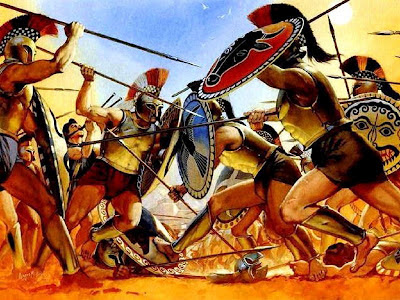 With mainland Greece free from foreign interference, Athens grew large enough to fight off attacks from Sparta, its primary rival. It continued its experiment with representative forms of government.This was a time when other Greek city-states were losing their independence.The island of Sicily, which was home to several city-states, endured many attacks from the Phoenician city-state of Carthage, located just across the Mediterranean in North Africa. To the east,Ionian Greek city-states came under the rule of the Lydians, until all of Anatolia fell to Persia’s king Darius I. Darius’s Persian Empire was centered in the Near East and stretched from Egypt to present-day Afghanistan.Athens became his target early in the fifth century b.c.e. Ionian Greeks rebelled against the Persian Empire in 499 b.c.e. Athens and Eretria sent military aid. Darius quickly regained control of Ionia, and now had a good excuse to invade mainland Greece and add it to his empire.It appeared to be an easy task. The Greek world was very small compared to the Persian Empire. Although Darius sent only 20,000 to 30,000 soldiers—a relatively small force—it was still more than double the number of Greeks who eventually faced them. The Persian army arrived first at Eretria on the island of Euboea in 490 b.c.e. They burned the city-state as punishment for helping in the Ionian revolt.From there, Marathon offered a good landing spot on the Greek mainland,because it was flat and was close to Athens. An Athenian army of 10,000 hoplites marched to the coast to meet the Persians. They were joined by 1,000 hoplites from the small city-state of Plataea. When the Persians appeared to be ready for battle, Athenian general Miltiades (ca. 554– ca. 489 b.c.e.) encouraged the Greeks to make the first move.

The hoplites marched in phalanxes into the Persians’ formation. Although they were greatly outnumbered,
the Athenians maneuvered their troops to trap the Persians between a swamp and the sea. Their heavy armor protected them from Persian arrows and they fought with their long spears.Expecting an attack on Athens to follow, the Greek army quickly marched more than 20 miles from Marathon back to Athens. But the Persians turned for home. The Greek historian Herodotus reported that the Persians lost 6,400 men, while the Athenians counted 192 dead and the Plataeans had even fewer. Although those figures may be exaggerated,they demonstrate the effectiveness of hoplite warfare.Darius planned another attack, but he died in 486 b.c.e., leaving his son Xerxes (ca. 519–465 b.c.e.) to take revenge for the defeat. It took several more years for the Persian Empire to return. This time they brought 75,000 to 100,000 soldiers. However, the Persians faced a more united Greece. The Greek infantry, led by Spartan king Leonidas (d. 480 b.c.e.), numbered about 70,000 hoplites and about as many lightarmed troops. As Xerxes’ army made its way around the Aegean Sea in 480 b.c.e., the king correctly assumed that the smaller Greek citystates would surrender without a fight. The Greeks planned to meet the Persians with a big force in east-central Greece at a 50-foot-wide pass called Thermopylae.

Thermopylae was squeezed between cliffs and the sea. The Greek hoplites delayed the huge Persian army at this narrow pass for two days.Then a Greek traitor showed the Persians a little-known way around the pass and the Greeks were surprised from behind. Knowing they were now beaten, Leonidas and a force of slightly more than 300 hoplites,mostly Spartans, remained at Thermopylae to fight. Their plan was to delay the Persians while the rest of the Greek army retreated to defend the city-states to the south. Leonidas and his men were greatly outnumbered and had no hope of winning the battle. But if they could delay the Persians long enough, their main force could move into a better position to protect the rest of Greece. These brave Spartans, including Leonidas,fought until the last man was dead. They have an honored place in Greek
legend and military history for continuing to delay an army many times their number.The Athenians expected an attack and abandoned their city. The Persians then destroyed it—even the temples atop the Acropolis. Then another narrow pass, this time at sea, led to the Persians’ defeat. Athens had the advantage because they had a large fleet of warships. Just before the Persians’ second trip to Athens in 480 b.c.e., a rich deposit of silver had been discovered at Laurium in southern Attica. The Athenians used this wealth to build a fleet of several hundred triremes.The Athenian warship, the trireme, was developed about the same time the hoplite soldier became common, around 600 b.c.e. It was most likely based on ship designs of the Phoenicians, who were expert sailors. The boat was long and narrow so it could move quickly and was easy to maneuver. The ships weighed up to 2,200 pounds and were powered by 170 oarsmen arranged in three rows, which is how the ship got its name—treis is Greek for “three.” The oarsmen rowed together,using the beat of a gong or a drum to keep the rhythm. The oarsmen rowed at a speed of up to 18 beats per minute. 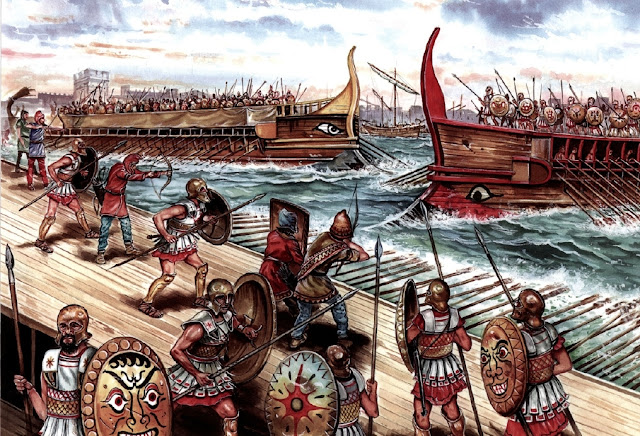 The trireme had a ramming “beak”—a battering ram made of oak and reinforced with a bronze cap that stuck out from the bow at water level. (A battering ram is a heavy object swung or rammed against
something to break it down.) The rowers sent the trireme into an enemy ship, making a hole in the hull.
At the time the trireme was developed, the Greeks fought primarily on land and naval warfare was rare. Under the leadership of Themistocles (ca. 524–459 b.c.e.), the Athenian fleet faced 400 to 500 Persian ships off the Greek coast just north of Athens. The triremes proved to be the better ships and much of Xerxes’ fleet was destroyed. The Persian ships then turned around,leaving a still-large army behind in Boeotia. The Spartans led a successful defense effort there at Plataea, while Athens continued to chase the
Persian fleet. The Persians were forced home. Once again, they were defeated by an enemy they greatly underestimated.The key to this military victory was Greek unity. When they were faced with the threat of being ruled by a foreign power, 31 independent Greek city-states came together to fight a common enemy. It was the first time in their history that they acted as a united group.

Even more remarkable was the cooperation between Athens and Sparta, each of which normally viewed the other as an enemy. Athens and Sparta continued their alliance long enough to drive out the remaining Persians from Ionia, Anatolia, and northern Greece.Athenian leaders were now convinced of the effectiveness of trireme warfare. They proposed forming and leading a league of city-states to build an even stronger navy, because everyone in Greece assumed the Persians would eventually return. The Greek historian Thucydides (d. ca. 401 b.c.e.) wrote in his History of the Peloponnesian War that the leaders of Sparta were glad to let the Athenians take on that responsibility.The naval alliance was organized and dominated by Athens.It consisted of the city-states that were most in danger of Persian attack: those in Ionia and on the islands in the Aegean Sea. Larger citystates contributed triremes and their crews, while smaller ones combined their resources to provide wealth or one ship. The alliance was called the Delian League, because the money was kept at the temple of Apollo on the island of Delos. (City and other treasuries often were kept at a temple where, it was believed, the god would protect them.)
Αναρτήθηκε από Unknown