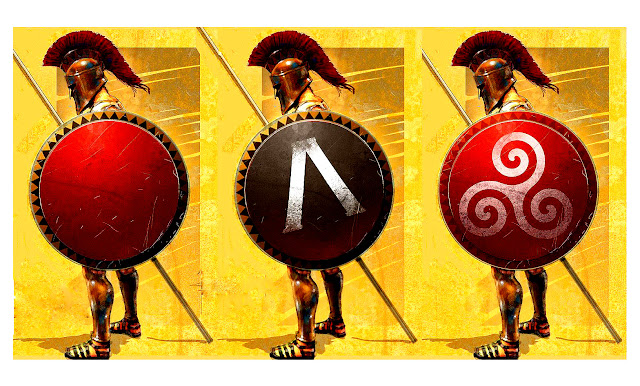 The rise of tyrants in the bigger city-states came about at the same time the hoplites emerged. By the 600s b.c.e., hoplites were common in city-state armies. The hoplite soldier was outfitted with a bronze helmet and breastplate,a broad, heavy shield,and an iron-tipped spear up to eight feet long. The shield had a distinctive double grip:The soldier put his whole arm through a band that ran across the center, and then held another small hand grip at the edge. This took all the weight off the wrist, and enabled him to hold up the heavy shield with one arm.Hoplites were extremely effective in battle. They marched in a very tight formation called a phalanx. Each soldier’s shield overlapped the shield of the soldier next to him, leaving few places for enemy weapons to penetrate. The hoplites were difficult to stop as long as they stayed in their phalanx formation. Altogether the hoplite carried and wore about 40 pounds of equipment in battle, which he paid for himself. The hoplite enjoyed a higher status than the traditional soldier, who perhaps had just a sword, or an archer who used a bow and arrows. Archers, for example,used their weapons from afar and avoided the close-up warfare the hoplites faced. Because less courage was required, the archers gained less status. Archers and other light-armed soldiers were also assumed to be of a lower economic class, since they could not afford the bronze hoplite armor.

In his book The Wars of the Ancient Greeks, author and classics scholar Victor Davis Hanson describes a likely encounter between two companies of hoplites, each representing a city-state or a confederation of city-states. The front rows of each company marched toward one another, each trying to remain in their phalanx while they broke up the formation of the other. Holding their 15-pound shields at chest height for protection, they used their spears against the enemy as the lines began to stumble or break apart. All of this was done under a blazing Mediterranean sun as the hoplites struggled in their bronze protective gear amid clouds of dust, with the bodies of wounded and dead piling up around them. Greek city-states had
frequent battles with one another over boundaries or other land control issues. A city-state did not hesitate to go to war to acquire more farmland if it would mean keeping the population fed. But although war was a common fact of life, large battles between Greeks in the Archaic period were unusual. Battles tended to be brief, perhaps lasting only an afternoon. This limited casualties and damage to the farmland they were defending or trying to acquire.Strict discipline was the key to a successful hoplite army, and nobody practiced discipline better than the Spartans. Sparta, unlike all the other Greek city-states (1,500 of them), developed into an entirely military state in the Archaic period. Its professional hoplite soldiers were the most formidable in Greece. In fact, Spartan discipline was so tight that the system of government remained the same over many centuries. Rebellion against authority was considered un-Spartan.
Αναρτήθηκε από Unknown